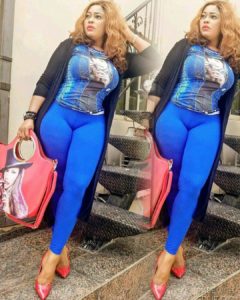 If rating is to be applied, Nollywood actress who is more at home with Yoruba movies, Biodun Okeowo a.k.a Omobutty, is not likely to have impressive rating, because she’s not as busy as those who are in the top category. However, the light skinned mother of one attracts attention on account of her beautiful face, fleshy body and the area of her bottom, where she’s considerably endowed. Also, her mastery of flaunting her body features, as well as controversies she’s involved in gives her desired patronage.

In the same manner she’s fond of displaying her cleavages and curves, the actress recently uploaded a picture of herself where the shape of her private was clearly on display through her trousers, so much that little is left to imagination. Some of her fans applauded her daring nature that made her posted such image, as well as how beautiful she is in the picture. On the other hand however, Okeowo has received more bashing  than the applaud, as lot of other people feels it’s only high level of immorality that could have made her contemplated posting of such indecent image of herself. She was not only called unprintable names in the comments on her instagram page, her role as a supposed role model and a mother were also put under query.