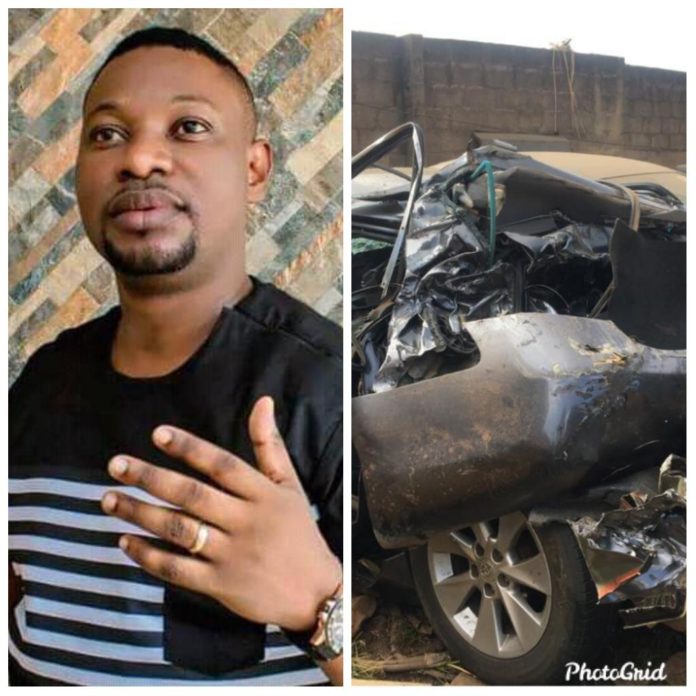 Following survival of fatal motor accident that would have thrown his fans, family and friends into mourning, popular gospel singer, Damilare Odunuga better known as Dare Melody has declared it’s time he builds a house for the Lord.

The sad incident has however turned a celebration galore when it was confirmed that the singer alongside three other people were left unhurt. 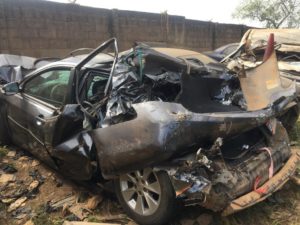 The accident occurred along Lagos/Ibadan expressway on Saturday, November 21 at around 4:15 after an energy sapping performance at New Seraph All White Concert at Jogor Center Ibadan.

A trailer coming from behind the Toyota Camry that conveyed Dare Melody was hit from the rear and at the same time hit another truck in the front, this however led to the car crushed between the two trailers.

Even with the loss, the Aparaki, Ogun State born talented singer has every reason to be thankful to God.

I instructed my staff that there’s need for us to embark on a 3-days fasting as and prayer as revealed by God prior to our journey to Ibadan. It was like a magic when the whole thing happened. I checked the three other people to ensure they were still alive and that they were not hurt. I know God Almighty is still on the throne as we all came out of the car unhurt.

I tried opening the door by my side alas they were all locked. it was the driver of the bus that conveyed other band members that rushed out of the bus and forcefully opened the doors for us .” Dare Melody narrated.

Looking at the accident from Africa belief, some may believe you’re being protected in ‘ Africa way’ (general laughter), how do you defend this?

“I just told you I heard the voice that we should begin a 3-days fasting and prayer and this happened while coming from a show at Abule-Egba and few days after the fasting and prayer, the accident happened. It’s nothing but the grace of God. I don’t do Juju all I believe in is my God who has remained my guidance and protector. I believe so much in God Almighty, let’s quickly check my personal prayer room, (took the reporter to a room decorated like a church).

This is where I pray to my God everyday before I set out and when I come back unless if there’s a show that holds us till the next day, it’s God and nothing else.”

Narrating his next line of action, Dare Melody said he believes God still wants him to keep praising and show appreciation for all He has been doing in his life.

“We are working on a show come 27th December which will be a Thanksgiving Show to show our appreciation to God for his blessings and protections over me and members of my band.

Also an album is coming which particularly is to still praise God the more. I titled it ‘Ijo Ope’ (Thanksgiving Songs).

“Since the Sunday that followed the incident, we have been having an hour thanksgiving service and will continue till 27th of December which will be the grand finale.”

He also spoke about 2020 which according to him is a very tough year with the emergence of Coronavirus and EndSARS protest.

“I believe 2021 will be a great year as I’m planning to buy a land and build a worship center for God, I can’t quantify what God has done in my life and since I have no choice than to keep praising Him since I don’t have any other protector other than him.

However the soon to be released album ‘Ijo-Ope’ is a single track and fully loaded. It’s going to be a bang because it’s a ‘hip-gospel’ song that will surely distinguish Dare Melody and I’m appealing to my fans not to miss this rare song.” He concluded.