It is no longer news that the vacant stool of Alara of Ilara kingdom in Epe is billed to be occupied by Prince Olufolarin Olukayode Ogunsanwo who has been selected as the next Alara. However, what could be of interest at the moment is that, as part of processes that precede his coronation, the Oba –elect has been presented to the council of Obas in Epe Division of Lagos state. 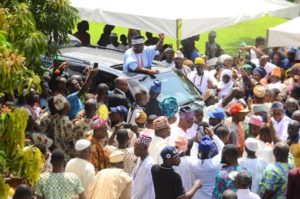 Prince Olufolarin in an exciting atmosphere was presented to traditional rulers in Epe Division as the man designated to ascend the throne of Alara, the oldest stool in the Division. The event which took place yesterday at Epe Local Government Authority had lot of important personalities in attendance as well as well meaning individuals from the Division that came out in their numbers to show their support for the Prince Ogunsanwo who will ascend the throne as the 55th Alara. 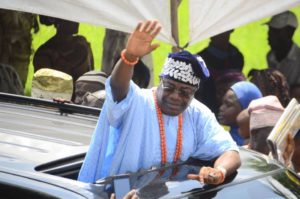 Speaking to newsmen, elated Ogunsanwo thanked God for the day as well as making him the Oba-elect. He also called on those who competed with him in the race for the stool to put the event behind and join hands with him to ensure there is development in Ilara.

‘I am happy and I thank God for making a day like this reality. Also, I give all glory to God for making me the centre of attraction as the Oba-elect of Ilara kingdom. It is God who enthrones kings and it has pleased him to make me a king.  On another note, I want to plead with all those who were in the race for Alara throne with me to let us put that part in the past where it belong and let us face the future together. Development of Ilara is a task that we must collectively undertake, so let all join hands to and make sure we move the town to greater height’. He said.

Chairman Eredo local government, Honorable Adeniyi Saliu who graced the presentation of Alara-elect to Oba in council, emphasized the importance of Alara stool as the oldest in the Division and its value in Lagos as a state.  He also commended the choice of Prince Ogunsanwo as the Alara-elect, saying his exposure, education and influence will rub positively on Ilara when he finally ascends the throne.

Giving reasons why the event was colorful with all the notable kings in Epe Division in attendance, head of the king makers in Ilara, Adeshina Olamide Modiu, said the event could not have been less colorful because the stool of Alara is not just a stool but a notable and prominent one in Epe Division and the state as a whole.

Furthermore, Modiu affirmed Oba-elect, Prince Olufolarin Ogunsanwo is a round peg in the round hole as far as the stool of Alara is concerned, because he’s  an achiever and a personality of impeccable character who is vastly read and highly influential, hence suitable for the highly revered stool like that of Ilara kingdom.