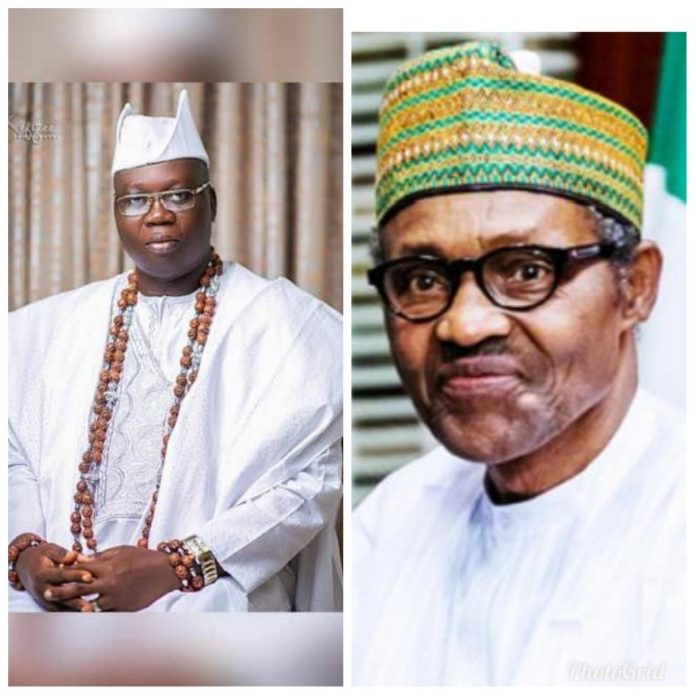 The Aare Onakakanfo of Yorubaland,  Gani  Adams, has  condemned the proposed N100billion funds allocated to Miyetti Allah Cattle Breeders Association of Nigeria (MACBAN),explaining that such allocation will further encouraged the spring up of additional  pressure groups across the country.
Adams gave the caution note in a statement he personally signed on Sunday, stating that such funds should be channeled to other lucrative areas, to avoid crisis which may trigger off in other zones, particularly, in the Niger Delta region.
The Aare OnaKakanfo pointed out that, the Federal Government should realized the fact that, the spate of insecurity in the country is alarming, and it is not limited to the North alone, hence, there was no point treating such with kid gloves in favour of a section at the expense of others
“The issue at stake is about the spate of insecurity across the nation, it is not limited to the North. Therefore, the Federal Government needs to be cautious on the move. Here in the South West, the spate of insecurity is raging’, the statement reads.
‘For instance, in Akokoland, in Ondo State, which happens to be my hometown, there were series of attacks and kidnapping that had been raging and still on the increase. People have been killed, and kidnapped at will, and the situation still continues till the present moment’,Adams said.
‘Last year, Chief Olu Falae’s farm was invaded and destroyed by this group of herdsmen; Chief Alani Akinrinade also suffered the same fate. In Ijebu Ode, Ogun State, a prominent Yoruba son lost several millions to the activities of these killer herdsmen’.
‘Several other people in the South-West had had the bitter experience. A situation whereby an Oba in Akokoland, and a lecturer from Obafemi Awolowo University were kidnapped along Ilesha-Ife road, and released after paying huge five million naira as ransom is pathetic and not too good for the nation”.
Adams, noted that the proposed N100bn for Miyetti Allah is very much higher than the total budget package for the Niger Delta Development Commission (NNDC) for three years, arguing that the move can trigger avoidable crisis across all the zones in the country.
The Aare Onakakanfo, also urged the Federal Government, to as a matter of urgency, extend the new security arrangement to other zones assuring that, in South- West, there are groups that are keen to support government’s initiatives on reducing the spate of insecurity in the zone.
The warlord while reacting to the new security measures put in place recently, by the Minister for Defence, Mansur Dan Ali, at a meeting with traditional rulers which took place at the Arewa House, and urging them to create local security apparatus in order to fight the increasing spate of insecurity in the North, lamented that, government has never deemed it fit to extend the olive branch to the other regions or geo-poilitical zones.
The Aaare, however, commended President Muhammadu Buhari on his views about true federalism, calling him to handle the true federalism, the way and manner he handled the June 12 issue, which today made him an hero.
“With the new situation, I think Mr. President has an idea of what we have been saying all these days about true federalism and restructuring. Nigeria’s problems can only be solved with true federalism’, he said.
‘Many of the problems plaguing our nation, especially, insecurity can be addressed through federalism. For example, if all the regions develop at their own pace, every other issues, including security, power, and health would be taken care of at the state level’.
‘The President will be in the best position to coordinate the affairs, and efforts could be made to get the country back on the right track. So, it is interesting to note that Mr. President can hear the voices of many Nigerians that see true federalism as solution to the problem of the country”.
He advised President Muhammed Buhari to be cautious of some dubious and selfish politicians, who may want to discourage him, from handling issue of federalism to the benefits of the country, as well as the citizens.
‘I want to appreciate the President on his position on true federalism. I want also call on him, to address the issue, the way he perfectly handled the June 12, which today earned him lot of respect and leadership qualities. He should also be wary of dubious and selfish politicians who may want to discourage him’ Adams emphasised