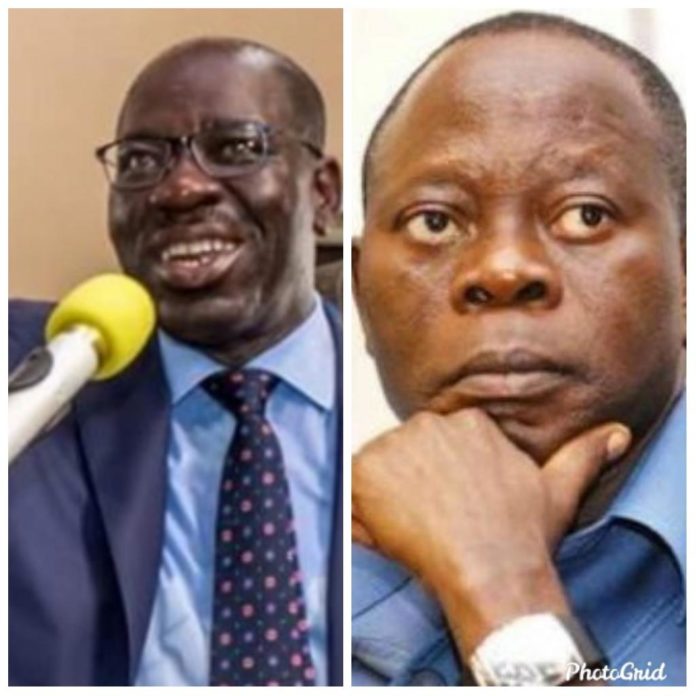 Following reported attack on the residence of the National Chairman of the All Progressives Congress, Comrade Adams Oshiomhole, there was tension in Edo Sate on Sunday.

It was gathered that some youths had gathered at Oshiomhole’s residence chanting songs, ‘Oshiomhole Ole Oshiomhole Ole’ but were dispersed by anti-riot policemen.

Chief Press Secretary to Oshiomhole, Mr. Simon Ebegbulem, insisted that there was an attack by thugs sent by Governor Godwin Obaseki.

He said the attack was part of the resolution reached at the last State Executive Council meeting that all anti-Obaseki second term bid be attacked.

Ebegbulem stated that it was desperate bid to get a second term but that the attack was neutralised by some APC youths who were mobilised to Oshiomhole’s residence.

Police Commissioner, Danmallam Abubakar, who denied any attack on the residence of Oshiomhole, said some persons planning protest were dispersed.

“It is a lie. There was no attack. Nothing happened in the area where Oshiomhole lives.”

On his part, Special Adviser to Governor Obaseki on Media and Communication Strategy, Mr. Crusoe Osagie, said the allegation against his boss was false.

According to him: “The Edo State Government has said it has absolutely no knowledge of the purported attack on the person or the residence of former Governor of the state and National Chairman of the All Progressives Congress (APC), Comrade Adams Oshiomhole.

“We have no knowledge of the attack. We have also reached out to the Police, and they affirmed that they do not know about such an attack.”

Meanwhile, Chief of Staff to Governor Obaseki, Mr. Taiwo Akerele, has petitioned the Nigeria Police over attack on him by a supporter of the Edo Peoples Movement (EPM) Mr. Tony Adun popularly known as Kabaka at the Protea Hotel.

Akerele said the attack occured while he was meeting with some foreign investors.

He said he went to the hotel at about 7pm for a meeting with some foreign investors and during the meeting Kabaka came and attacked him verbally.

Akerele said Kabaka was walking towards him when some persons restrained him.

“And I just came from Igarra where I met that unknown persons entered my room through the ceiling. I have reported to the police in Igarra and when I came to Benin, I went straight to Protea where I had a meeting with some foreign investors and I experienced the attack”.

Kabaka denied the allegation and said he went to the hotel to see how Oshiomhole was faring after the attack in his house.

“Thank God Protea is a world class hotel and they cannot say that they don’t have CCTV. They should go and play it and see what transpired between us. If there is an attack and attempt of assassination as being alleged, Tony Kabaka will go in for it but there is no such attempt, I will sue them”.