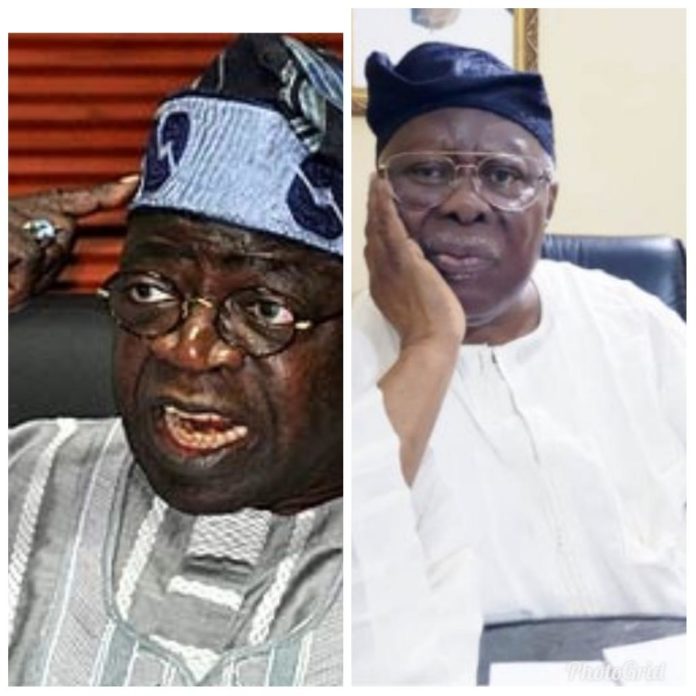 Lagos APC has hit hard at Bode George, accusing him of all sorts. Hear them:

“Our attention has been drawn to a statement being peddled by Mr Kola Abiola and the serial election loser in Lagos, Chief Bode George that our leader, Asiwaju Bola Asiwaju Tinubu, begged the Late General Sani Abacha for the post of a commissioner in Lagos State. According to the story credited to Kola Abiola, “ It was after Tinubu had lost out that he decided to join hands with the National Democratic Coalition for the actualization of June 12 mandate.”

At first we did not find the need to dignify a collapsed and a failed politician in Lagos or a little kid without sense of history with a response at a time like this, but we changed our mind because we do not want to allow lies to be told a thousand times so that some people will now believe it as the truth.

Before the annulment of June 12 1993 Presidential Elections, Governors, Senators, House Of Reps Members, State Assembly Members had been in place and to all intents and purposes Asiwaju Bola Ahmed Tinubu was one of the elected Senators from Lagos. Now, how can an elected Senator be asking for a mere appointment as commissioner? Does it make sense to anybody who is privileged to be a sensible person?

We do understand the reason why Chief Bode George always has this penchant to get at Asiwaju Bola Ahmed Tinubu at the drop of a hat and even when it is not necessary. The gap between Asiwaju BAT and Chief Bode George in terms of political sagacity, leadership, achievements, followership, capacity, acceptance, credibility, etc is a huge one in favour of Asiwaju . Asiwaju has been defeating and crushing Chief Bode George in every election in Lagos for 20 years and the world knows that George has been an unhappy man for 20 years. How can anyone in all honesty expect Chief Bode George to celebrate his potential political enemy?

Chief Bode George has found himself in a miserable political position in Nigeria in the past 20 years and everybody knows that Asiwaju kept him in that miserable situation and only a baby will think that he will be fair to ASIWAJU BAT in anything at all. While it is possible for Chief Bode George to work so hard to get to ASIWAJU’s level in the next 20 years, it is difficult if not impossible to bring Asiwaju to Bode George’s pathetic level in order to bridge the gap.

Lagos APC thinks that it is high time Chief Bode George took time to reflect on his poor and unpleasant politics in Lagos and the South West in the past 20 years and try to amend his ways for the better. An Igbo adage says when an old woman falls down two times on her way to the market she is bound to count what is remaining in her basket. Time has come for Chief Bode George to take stock and do a sober reflection on his political career”, ended Joe Igbokwe, APC Publicity  Secretary, Lagos.