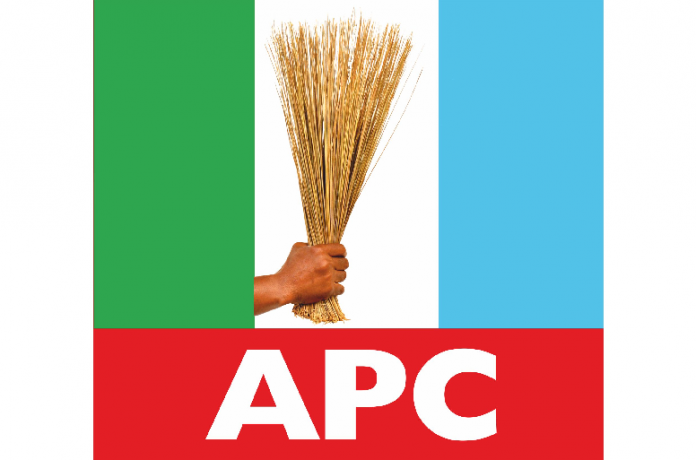 APC Vice Chairman for Ojodu LCDA, Mr. Abass was reportedly attacked and abducted from his residence in Oluwole Estate Ogba by the armed gang Sunday morning and taken to the Party Secretariat at Oremeta street, Ojodu.
On getting to the secretariat, the marauders demanded to know the whereabouts of the Party Chairman, Comrade K. K. Ajakaiye. Sensing that Ajakaiye (who was apparently in Abuja for the APC National Convention) was nowhere to be found, the bandits descended on Abass, beating and wounding him viciously. We also gathered that all electronic gadgets in the office as well as other valuables were either totally destroyed or carted away by the armed thugs.

On leaving the secretariat, APC Vice chairman, Abass who was reportedly bleeding profusely was driven to an unknown destination by the attackers who came in a private car. His whereabouts is still unknown as at the time of writing this report.

Reliable sources confirmed that the bandits, who claimed to be protesting against the result of the house of Assembly Primaries which didn’t favour their aspirant, also launched another attack on the residence of APC Woman Leader, in Ojodu, Alhaja Stella Kokumo who resides in the same community as the aggrieved aspirant. Kokumo was said to have escaped attack by the whiskers.
As at 3 O’clock Sunday, scores of miscreants allegedly loyal to the defeated aspirant were seen protesting with various placards all over major locations in the Ojodu LCDA, especially Aguda threatening and harassing passers-by as well as those perceived not to have worked in favour of their aspirant, *Olatunde Ogunbiyi-Davies aka, Tuye*, especially notable APC figures in Aguda and Oke-ira axis of the LCDA

A visibly shaken eyewitness stated that “in the history of Ojodu politics we have never witnessed this type of brigandary and brutality in an ordinary primary election within thesame party, everybody is simply terrified. The authorities should move in quickly and rein in these people and even the person they claim they are fighting for. Election should not be a do-or-die affair. I was told that the party APC had earlier persuaded and advised the defeated aspirant to step down and wait for his turn in order not to distort the zoning and rotation arrangement in the Constituency, but he refused and brazenly disobeyed the party. While other aspirants like Engr. Adefemi Boluwatife Kamal and Olaide John Bello (OJB) who were more popular across the constituency agreed to follow the Party’s advice by stepping down, Tuye insisted on going for the Primaries, promising that he “will accept and abide with whatever is the outcome”.
In our political clime here, once you dared your party it means you are ready to face and accept the outcomes. It is therefore a cheer waste of time to resort to violence, protest and intimidation of people after losing the election which they advised you honourably not to contest in the first place. Ojodu has occupied the Assembly seat from 1999 to 2015, that is 16 good years, the leaders now said, in the interest of fair play, Ikeja should be given the chance too. That was how it was zoned to Ikeja in 2015 and the Party said, it should remain in Ikeja for the next for years, but you Tuye, from Ojodu LCDA said the Party was talking nonsense, you went ahead, contested and lost and you are now formenting trouble in the Constituency, we can not allow this to continue. If other aspirants have disobeyed the party and contested, Tuye wouldn’t have made any major impact. Therefore his present grievances is an insult to the sensibilities of the other aspirants who spent their money and time but yet, were honourable enough to step down. We cannot allow this type of behaviour to continue in Ojodu” stated the source who is a party member.

It would be recalled that the Lagos APC primaries For House of Assembly took place on Friday 5th October. At the end of the exercise, the incumbent lawmaker for Ikeja Constituency 2, Hon. Adedamola Richard Kasunmu Kasunmu (ARK) was declared the winner with a total of 6354 as against his opponent, Olatunde Ogunbiyi-Davies (a.k.a Tuye) who polled 316 votes.

However, Tuye’s camp has been protesting against the result, describing it as “a rape on internal democracy”.
One of the supporters of the aspirant simply known as Jolayemi was quoted through his social media handle that his aspirant performed better than the result announced and that they are going “to fight it to a logical conclusion”

But our findings revealed that Hon. Adedamola Richard Kasunmu secured his victory majorly from Ikeja and Ogba axis of the constituency where he won overwhelmingly with the majority votes cast. We also gathered that elections in two major wards in Ojodu LCDA did not hold due to threats and violence unleashed at the voting centre by the camp of the aspirant challenging the incumbent.

Meanwhile, information reaching us indicates that law enforcement agencies from State Police Command have been drafted to the area to rein in those disturbing the peace.