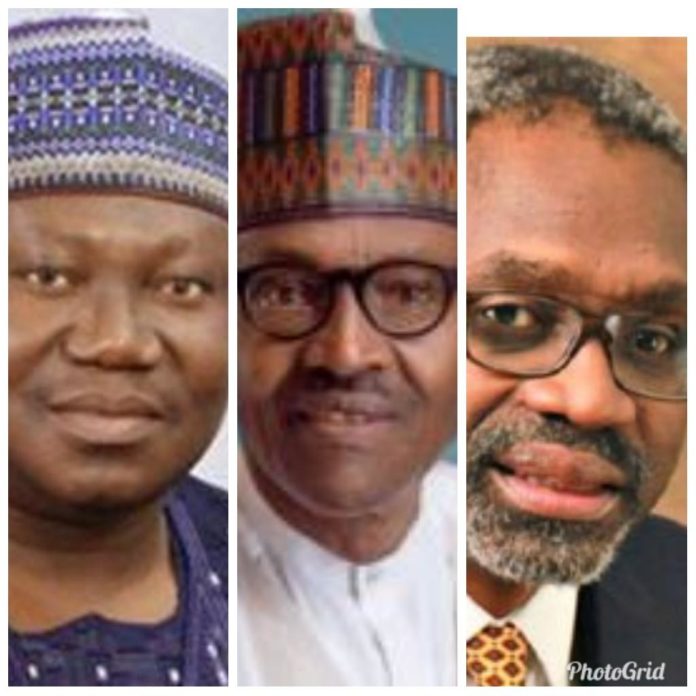 President Muhammadu Buhari may have learnt from the scenario that happened in 2015 where Senator Bukola Saraki and Hon. Yakubu Dogara emerged president of the senate and speaker House of Representatives respectively against part wish as he’s said to have consented to Ahmad Lawan as senate president and Femi Gbajabiamila as speaker of the House of Representatives in the in-coming national assembly.

The move, leadership of the ruling party, APC feel is a good move as it is believed to have sent signal to Bukola Saraki who is alleged to be plotting to have a hand in making of leadership of the senate. The move is also believe will make Senator Ali Ndume and Nkeiruka Onyejeocha who are interested in the leadership role of the upper and lower chamber to back down on their dream.

The duo of Lawan and Gbajabiamila who are currently the leaders of the APC caucus in the upper and lower chambers of the national assembly, enjoyed the support of the president in 2015 but Senate President Bukola Saraki and Yakubu Dogara, speaker of the house of reps, teamed up with some Peoples Democratic Party (PDP) lawmakers to edge them out.

While Lawan did not get the opportunity to go head-to-head with Saraki, Gbajabiamila lost to Dogara by eight votes.

However, Saraki is out of the way, having left the APC for the PDP and lost his re-election bid.

Dogara is also not expected to put a fight as PDP, his new party, does not have enough numbers in the house of reps.

In the red chamber, APC has 25 seats more than PDP while the ruling is clearly ahead of PDP by 100 seats in the green chamber.

Last week when he announced his ambition to lead the senate, Lawan, who represents Yobe north, said the ruling party will do things differently in choosing the leadership of the 9th national assembly because it had learnt its lessons in 2015.

“We are not in any way thinking that we will have crises; it is not what we are envisaging at all. But let me say that our party, the APC, must have learnt its lessons, and therefore, the party leadership will do something differently this time,” he had said at a press conference in Abuja.

Lawan was elected into the House of Representatives in 1999 and got into the senate in 2007. The 60-year-old is a graduate of the University of Maiduguri where he read geography. He also has a postgraduate diploma in land survey, an MSc and PhD in Remote Sensing and Geographic Information System (GIS), all from the University of Cranfield, United Kingdom.

On his part, Gbajabiamila, who represents Surulere 1 federal constituency of Lagos state, is an ally of Bola Tinubu, a national leader of the APC. He was first elected into the green chamber in 2003.

A law graduate from the University of Lagos; he started his career with the Bentley, Edu and Co law firm in Lagos before he established his own firm, Femi Gbaja and Co. where he was principal partner. Gbajabiamila later returned to John Marshall Law School in the US and was said to have graduated top of his class, earning himself a juris doctorate. He set up a law firm and had a brief stint of practice in the US after he passed his Georgia bar exams in 2001. Later, he returned to Nigeria to join politics.

The national working committee (NWC) of the ruling party was in a meeting with the newly elected APC members in the House of Representatives on Monday when this report was filed.

Speaking at the Yar’Adua Center, Abuja, where the politicians gathered, Adams Oshiomole, national chairman of the APC, made it clear that the purpose of the meeting is to ensure that the party produces the leadership of the lower chamber.

“We will ensure that we have a leadership of the national assembly that shares the vision of the executive. Although we stick to separation of power and unless the various arms pursue the same agenda it is difficult for the executive to fulfill its promises and legislative backing is often require for most of the executive actions,” Oshiomhole said.

Additional report from The Cable