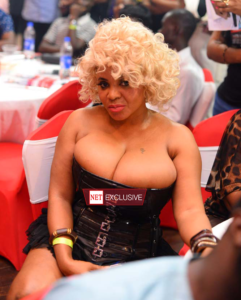 After a long time off the movie scene, busty actress, who is seen as sex symbol, Cossy Orjiakor is back in action following her role in a new effort. Meanwhile, the producers of the highly hilarious movie, Kondo Game, have disclosed why they featured loads of A-list stars in the movie.

According to them, the scripting demands using actors, who have not just the bearing, but

can relate in comical terms lives in a typical Nigerian neighborhood.

“The presence of some of these stars alone commands laughter,” says Maryam Harris. “The

script is set to dazzle movie lovers using events around them, but retold in dramatic and hilarious ways using remarkable cast. We saw the need to create a film that is highly entertaining and have committed huge investment to achieve first-rate production,” she added.

between crime busting and bursting a romantic fling with a voluptuous mistress, played by Cossy Ojiakor, who runs a beer parlor in the neighborhood. Cossy’s exploit heightens