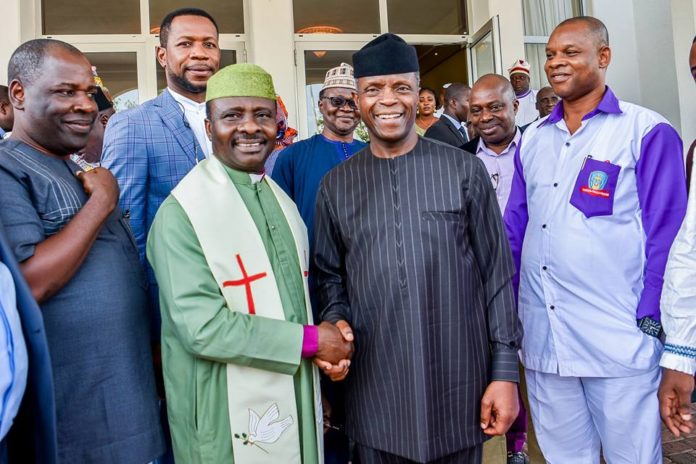 The leadership of the Christian Association of Nigeria on Friday visited Vice-President Yemi Osinbajo and described the allegations leveled against him by Timi Frank as baseless.

Frank, a former deputy national publicity secretary of the All Progressives Congress, had alleged that the Vice-President collected N90bn from the Federal Inland Revenue Service to fund the 2019 presidential election.

In response, the FIRS dismissed the allegation.

The Vice-President also said he was ready to waive his right to immunity from investigation in order to clear his name of certain accusations.

But addressing journalists after visiting the vice-president at the Presidential Villa, Abuja on Friday, CAN National President, Rev Supo Ayokunle, explained that they visited Osinbajo to pray for him.

Ayokunle, who spoke with newsmen at the Christian Ecumenical Centre, where he held a meeting with top members of CAN, said Osinbajo was innocent of the allegations, describing them as baseless.

He stated that the church and all Nigerians were proud of the VP and would continue to pray for him.

The Christian leader declined to give details of his meeting with Osinbajo, but urged Nigerians “not to toy with the innocent that are faithfully serving the nation,” adding that the whole country would rise up to fight for the vice-president.

Ayokunle said, “Vice-President Osinbajo has cleared the air that the allegation is baseless and there is no truth in it. He said some people are plotting against him and he was ready to provide himself to be cleared.

“If there is an allegation, there must be evidence; he said it can never happen and will never happen. The church and the entire country will fight for him.”

On the security situation in the country, Ayokunle said, “We must stay together to fight the challenges and we must overcome.”