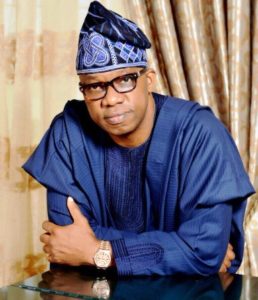 The saying that the most constant thing in life is change, many will steadily agree aptly fits the situation in which successful oil baron who sits atop flourishing oil business concern, Heyden, Prince Dapo Abiodun has found himself.

Light skinned and handsome Dapo, a few months back was the toast of many of his peers when he celebrated his birthday anniversary and the opening of his upscale hangout, 12Temple, in a very elaborate manner.

His fellow billionaire friends among many other important personalities who made out time to be part of the event no doubt elevated the status of the man. However, the situation which the rich dude has found himself in recent days is one that will make no one to envy him.

Dapo, few days ago recorded a sad incident when news filtered into town that his son, Olugbemiga who was better known as DJ Olu passed on. It is quite unfortunate that Dapo lost his son, but what seems to have become a more worrisome angle to the incident is the controversial tale that trailed the young man’s death.

News from some quarters alleged that Olugbemiga and his friend, Chime, who was equally found dead with him died from overdose of hard drug consumption.

As it is, while Dapo and members of his household are mourning the sudden death of their son, the man is also battling hard to ensure his name and image are not smeared by the tale of the hard drug linked to his son’s death. Many are of the opinion Dapo is doing everything he can to dissociate his son’s death with hard drug for the fact that he has his gaze on the governorship position of Ogun State, come 2019.