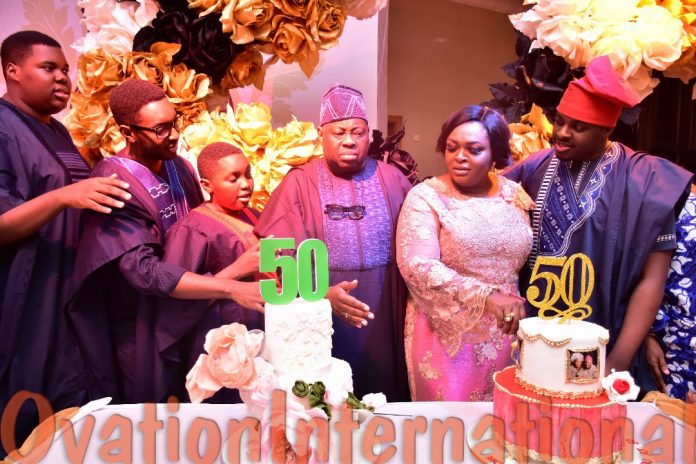 Foremost celebrity journalist and former presidential candidate, Bashorun Dele Momodu and members of his household are still basking in the euphoria of celebration which has pervaded their home recently and made congratulatory messages to pour in endlessly. Celebration mood started with the 25 years wedding anniversary between Bashorun Momodu and his lovely wife, Mobolaji. The bigger one later came few days ago as it was the golden jubilee birthday anniversary of the apple of Bashorun’s eye, his wife, Mobolaji Abiodun Momodu.
Going by his status as a celebrity journalist who has carved a niche for himself in high society, it was better left to the imagination what was going to go down at the birthday celebration fixed on 24th December. Expectedly, all roads led to Civic Centre located at highbrow area of Victoria Island, Lagos, where dignitaries and business moguls turned out in their numbers to identify with Bashorun Momodu on his wife’s birthday. The birthday ceremony was nothing short of expectation from a gathering by the publisher of Ovation Magazine as the event was simply a show of class, glamour and panache. The occasion started with thanksgiving service which was anchored by pastor Ojelabi and Ituha Ighodalo after which the reception proper was declared and gospel singer, Lanre Teriba took over the band to dish out tunes that put life into the day. Names on the long list of guests include: Governor Ibikunle Amosun of Ogun State and wife, Funsho, Otunba Iyiola Omisore, Doyin Abiola, Kola Abiola, Oba Saheed Elegunshi, Tokunbo Afikuyomi, Dr. Kayode Ajulo, Aremo Olusegun Osoba, Chief Alex Duduyemi, among others.