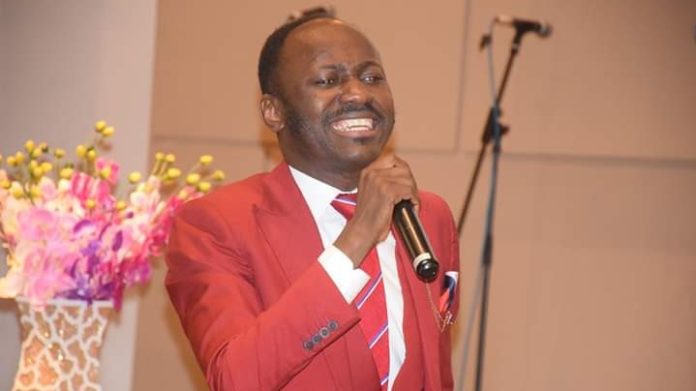 Having a good grasp of the prophetic genre is essential for understanding the message of God through His spokesman; the prophet that is. In this teaching by the senior pastor at the Omega Fire Ministries (OFM) worldwide, Apostle Johnson Suleman entitled ‘The Mystery of Prophecy’, the gift and mystery behind prophecy are dissected and traced back to the Holy Book, the Bible.
The firebrand preacher in this special session, breaks down the topic to such an extent that any dedicated believer and new convert can understand. The topic particularly enlightens the audience and most importantly tells how to obtain the gift of prophecy so that one can fulfil God’s designed destiny.
He gave the teaching first from Genesis 15:13.
”…and He said unto Abram, ‘know of a surety that thy seed shall be a stranger in a land that is not their’s; and shall serve them and they shall afflict them for four hundred years…”
Following up, he read from Exodus 12:30.
”…now the sojourning of the Children of Israel, who dwelt in Egypt, was four hundred and thirty years…”
In other words, Satan, he said, added 30 years. Therefore, he warns, ”if you do nothing about prophecy, time lingers. Every prophecy is a prayer point. Every prophecy is a battle. It took the Children of Israel 430 years for the prophecy to come to pass.”

These teachings by Apostle Suleman have answered questions like; what are the things that man needs to imbibe the prophesy and how prophecy affects man’s secular life, which really will change how prophecy is viewed at by believers.

Taking from Joshua’s pronounced solemn oath, the servant of God cited Joshua 6:26; ”Cursed before the Lord is the one who undertakes to rebuild this city of Jericho: at the cost of his firstborn son he will lay its foundation; at the cost of his youngest he will set up its gates.”
The prophecy came to fulfilment 70 years later when, according to 1 Kings 16:34, Hiel did undertake the rebuilding of Jericho in defiance of the divine warning, laying the foundation with death of Abiram his first son and completed it with death of Segub, his youngest son.
Also, in 2 Kings 4:16; Elisha said to her, ”about this time next year, you will hold a son in your arms..”, which she didn’t believe but came to pass one year after.
According to Apostle Suleman, all these and other Biblical instances do represent the certainty of the accomplishment of God’s warning; a most striking proof of the divine foreknowledge.
A passionate preacher of truths who carefully researches from established knowledge, Suleman speaks on topics that directly affects human productivity, happiness and creativity and carefully examines the teachings of the Bible aiming to show people life giving truths that would help them overcome any obstacle, live above all of life’s challenges and become a revolutionary world changer.