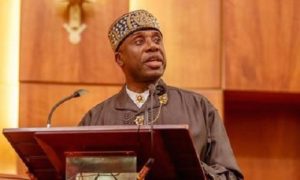 Shippers have been assured they will begin to experience safer Nigerian waters in the next six months. Minister of transportation, Rotimi Amaechi made this known on Thursday, while delivering a speech at Nor-Shipping’s inaugural Africa Podium in Oslo, Norway.

The minister said the country will spend $186m to combat piracy in a bid to safeguard its waters and vessels moving in and out of the country.

Amaechi allayed potential investors’ fears of growing security concerns in Nigeria’s seaway amid a rise in attacks by pirates.

He said the Nigerian government would give additional training to its navy while providing technical and further support to patrol vessels in the region.

Security would also be stepped up at the country’s ports, the minister said.

“Rest assured, in six months you will no longer be harassed in our waters,” he told delegates.

Amaechi said piracy is not the only issue currently impacting the progress of the maritime sector in Nigeria.

While admitting that eradicating this growing issue was the main priority, Amaechi was keen to point out that Nigeria was also making significant strides in its bid to improve its creaking transport infrastructure.

“All you hear about is efforts to stamp out corruption, but we are working extremely hard to develop transport infrastructure,” he said.

He said that huge investment and resources have been earmarked for road and railway projects, the development of ports, the dredging of inland waterways and coastal regions.

Amaechi also revealed that transport has by far, the largest budget allocation from the government.

“Things are changing,” he added.

FBNBANK UK STANDS TALL AT 40, APPRECIATES ITS CUSTOMERS AND REGULATORS