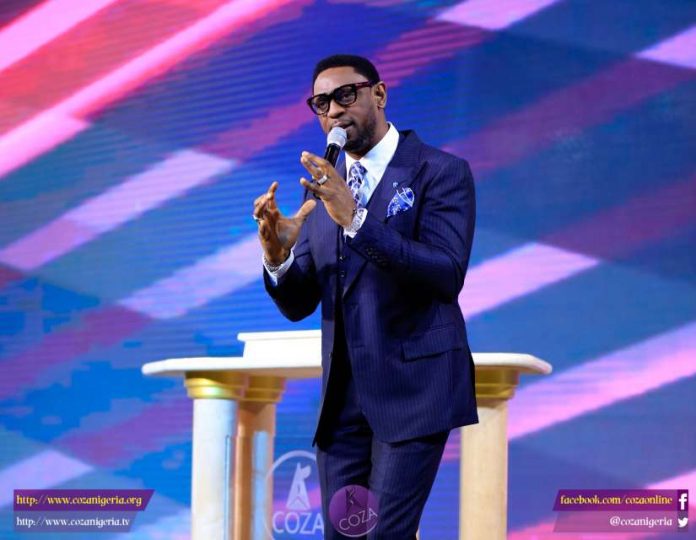 As far as the founder of one of the flourishing new generational worship centers around, Common Wealth of Zion Assembly, COZA, Pastor Biodun Fatoyinbo, is concerned, he doesn’t just appear as a man of God, he’s also reputed as one of the men of the pulpit who is not restricted by their faith not to enjoy good things of life, hence their choice of his flamboyant living. This tall and handsome man of God has over the years kept a life of luxury.

To say his flamboyant nature often put him under the spotlight is a fact that can be backed by evidence. His last birthday anniversary during which he had an all white party on a yacht in far away United Arab Emirate, Dubai is still fresh in the memory of many.  It’s in the same manner Fatoyinbo’s name is not new to controversy. It will be recall the cute dude was some time ago enmeshed in a scandal when he was alleged to be having carnal knowledge of a lady in his congregation who goes by the name Ese Walter. The dust raised by the scandal in a matter of time was settled. The city pastor who is based at the federal capital territory, Abuja, may have been engulfed by yet another controversy that is fast depicting him in bad light. Following heated debate over seed sowing that was initiated by on air personality, Freeze, the senior pastor of COZA, Biodun recently lend his voice to the debate, saying even if God condemns act of sowing seed, he would tell God he’s wrong because it is working for him. The video of his declaration has not only gone viral, it has equally brought the pastor under severe attack which many feel will take toll on his ministry as tongues are beginning to wag about authenticity of his calling.