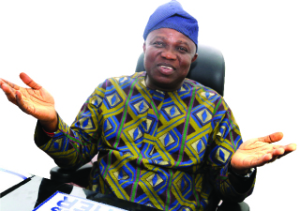 A non-governmental organisation, Centre for Democracy and Infrastructure Development has given the Lagos State Public Works Corporation (LSPWC) a 14-day ultimatum to rehabilitate the road infront of the secretariatof Agege Local Government or face mass protest.

The call was made in a statement signed by the National Coordinator of the group, Arc. Lanre Shodimu after the emergency meeting of the organisation which took place at the weekend.

“We are constrained to issue this statement because the road is becoming a huge embarrassment to the state government in general and Agege Local Government in particular.

“Investigations have revealed that the local government had sent save-our-soul messages to the corporation but the agency had not responded to any neither has the road been rehabilitated,” the statement said.

The organisation stated further that it was aware that the local government wrote on 6 September, 2018 practically begging for the rehabilitation of the road by the agency. “This letter was personally signed by the LG Chairman, Hon Ganiyu Kola Egunjobi. This was not responded to. Another letter signed by the Council Manager, Mr Esan Olufemi on 3 December 2018 was equally not responded to,” the organisation said.

According to the statement, Public Works Corporation’s non-challant attitude towards the road rehabilitation is causing untold hardship to commuters and motorists in the area. “We have resolved in our organisation to hold any government agency responsible forthe neglect to task and in this case, the Public Works Corporation is liable and we will not take it lightly with them,” the statement added.

“We are therefore giving the corporation 14 days to start work on the road rehabilitation or face massive protest from the people of Agege.