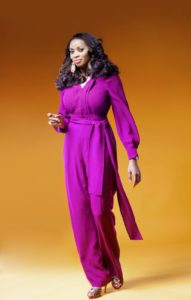 Chief Mrs. Folashade Okoya, Managing Director of Eleganza Industries, who is the wife of billionaire business man, Alhaji Razak Akanni Okoya, no doubt would still be basking in the euphoria of all that went down recently when she added another year to clock a milestone age of 40. She was greatly honored by members of the high society who turned in their great numbers to felicitate with the apple of her husband’s eyes on her special day.

Going by how much patriarch of Okoya dynasty, Alhaji Akanni has over years demonstrated that his wife beautiful wife, Folashade means the whole world to him and places her above anything, it was therefore not a to many who were privileged to witness the soiree, that the Kwara born influential personality went all out to organize a befitting birthday gig for his better half.  The whole affair was simply about class, ranging from a well decorated hall of event to chewable and expensive choice drinks made available in abundance, not leaving out top singers who were contracted to spice up the event. Like most guests who turned out in the English dress code, the birthday girl who decked in flowing white gown and her hubby spotting a suit were visibly very happy to see lot of well –meaning individuals from all walks of life honored them with their presence, even as they were on stand- by to attend to needs of the guests who they succeeded in treating to a great time. It’s certain that memory of the high octane will linger and dominate topic of discuss in social circle for a long time.