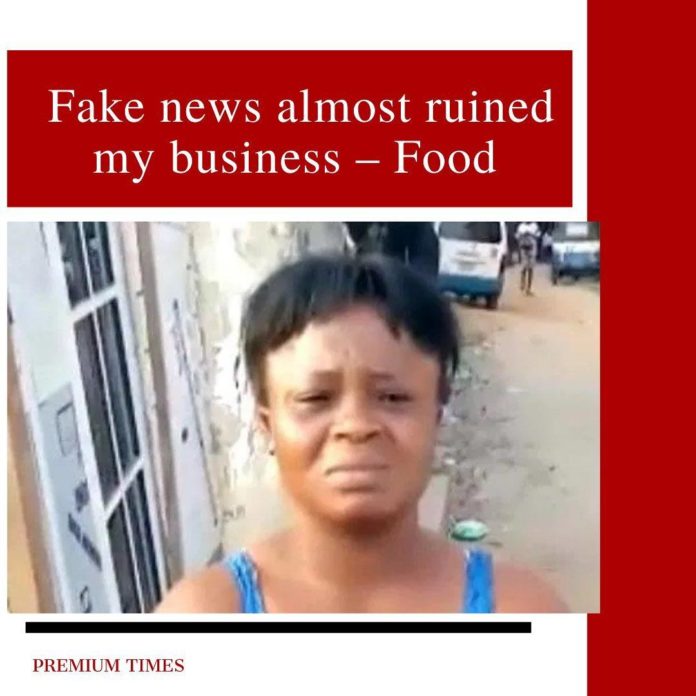 Ms Nwankwo lives in Awka, the Anambra State capital, where she sells cooked food for a living. She recently lamented the impact of fake news on her business.

Ms Nwankwo has been a food vendor in Ifite-Awka for11 years, selling varieties of food alongside her family without hitches, until recently, when stories began to circulate that she makes her food with water used to bathe corpses from an unnamed mortuary.

“I travelled for a burial in my hometown Ohaozara to return on Wednesday. On returning, my neighbours approached saying my name was all over the place. Initially, I thought it was a joke or my children had done something not until they began to narrate to me how rumours were making the rounds that I had been arrested by the police for cooking with water from corpses.”

Ms Nwankwo, who sounded jittery, told PREMIUM TIMES Thursday that she was still in shock and has not been able to eat well since she received the news.

“I have been selling on the table here in Royal Bed for 11 years with my husband and children, people knew me even before I started this business, they see where I fetch water from always… it is not hidden,” she said.

She said she and her husband used to be cleaners at Royal Bird Hostel, a privately-owned student’s accommodation for Nnamdi Azikiwe University students until students came together to help her start the food business.

As the news went round about Mama Tee or MummyTee as she is popularly called by students, with so many people sharing and resharing on social media platforms without verifying, a few students and ex-students who know her began to debunk the news.

Knowing how much harm this could do to her business, this group of young people came up with a hashtag PatroniseMummyTee to get people to patronise her food business. They also raised funds for her. As of the time of filing this report, N125,000 had been sent into her account.

Stanley Okeke, an alumnus of the Nnamdi Azikiwe University and Disc Jockey, popularly known as DJ Hotswagz, who is one of those raising funds on her behalf said, “I felt for the woman after seeing the viral video of her cursing the people who were peddling rumours about her business. I felt she needed a change of business after this.”

“I never knew her until this happened,” he said.