South African based Nigerian Prophet, Samuel Akinbodunse is at it again as his prophecy on the election of Namibia is has come to pass . The Prophet, who is the General Overseer of Freedom For all Nations Outreach (FANO) and CEO Of FANO TV, South Africa prophesied that the Incumbent President, Hage Godfrey  Geingob would  retain power and the vice president will be a female and interestingly it came to fulfillment as predicted. 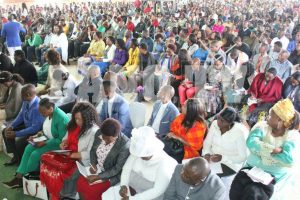 He first said this during a live service at his church on October 29, 2017 before the election of the party which the President belongs to.

In his Words, ‘I want to say this to everyone, and to those who are in Namibia, I don’t just talk, but I am still seeing the existing president still carrying on in Namibia, I know that some people who wants the President out will hate me but the voice of God must be established and I am seeing a woman as the deputy. It’s not yet time for a Lady president to rule Namibia, they still need a rugged strong man.

Similarly, on the 12th of October, he prophesied that he still sees the same thing, urging the citizens of Namibia to maintain peace

‘’ Namibia, let there be peace, the President that is ruling you is still going to rule you, I’m not a politician and thats why I can open my mouth to declare the word of God. No matter what anyone does, he will still be the one to rule’