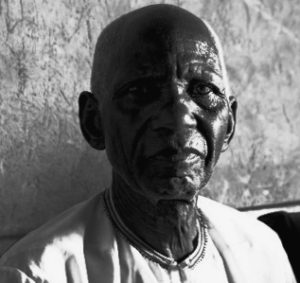 Of recent, a community leader, traditional chieftaincy title holder and head of Sorala ruling house of Agbelekale Town, Chief Joseph Abolade Peters gathered members of his extended family and people of his community to publicly disown one of his sons, Oluwaseun Adewale Peters while also cast a spell on him, for daring to identify with an organization in England; which is strongly clamouring for homosexual rights in Africa.

Freelance Correspondent, Sola Alele got wind of it and sought an audience with the community leader, who poured out deep-rooted bitterness from the bottom of his heart; as you will find in the excerpts below. Enjoy it.

Q: Can you please introduce yourself sir?

A: I am High Chief Joseph Abolade Peters, a community leader, traditional chieftaincy title holder and the head of Sorala ruling house of Agbelekale Town

Q: We learnt that you gathered people of your community recently to publicly disown one of your sons and we like to hear from you.

A: The bastard in question, Oluwaseun Adewale Peters was my son. But as I speak with you now, he is as good as dead and forgotten to me. I don’t reckon with him anymore and that is it. Look, I would not have entertained your request ordinarily, but because you are a news medium and I see that you will take this information to a larger audience; that is why I will talk to you about the bastard, misfit, lunatic… a scum of the earth. I regret I ever knew a monster like him; let alone fathered him and I curse the day he was born (fights back tears)

Q: Could he have shown traits of preference for persons of same sex even while under your watch, but you did not happen to notice it?

A: No way! He was brought up in the most upright Christian way, attending Sunday School right from childhood where he was taught valuable life lessons in the way of our Lord Jesus Christ. But having lived in England, he was corrupted by the insanity of the English society and he lost his soul to the devil. Oluwaseun lost his soul to the devil and he became a son of the Satan.

Q: You sound very bitter and one can feel your pain, but can’t you simply let him be once he lives in a society which allows him his choice?

A: What insane choice? I have a pain in my heart and I felt my world crashing before me by the shameless act of the good-for-nothing fellow I had the misfortune of having as a son. The lunatic dragged the family name in the mud by his devilish act and I regret ever sending him to school in the first place; perhaps he would not have been exposed enough to travel to England, not to talk of being involved with homosexuality and even coming out to identify with it openly.

Q: Sir, we got a clue that all you acted upon so far were unconfirmed rumours, what would you say to that?

A: What do you mean unconfirmed rumours? His estranged wife reported him to the family and we did a thorough investigation, upon which we found out that he is deeply involved in the mind-boggling devilish act. See, he was supposed to be happily married, a man to a woman as commanded in the scriptures. But he lost his mind at a point and opted for same-sex intercourse.

Q: Well sir, can we try to look at it for once, from the angle that he has fundamental human rights and he is old enough to make his choices?

Q: No doubt, you would be the happiest man on earth if Oluwaseun denounced his sexuality choice today and go back straight. But in the time being, could you find a space in your heart to forgive him; maybe that could encourage him?

A: No way! I would not accept abomination in disguise. Let me tell you, I have instructed the entire family members, relatives and people of the community to stop having anything to do with him. He has been disowned as a member of the family and he has ceased from enjoying any benefits, including title to the stool of the headship of Agbelekale town and any entitlement to the family properties in Ibadan, Abeokuta and Lagos.

Q: While thanking you for your time sir, is there any of your answers you would like to review?

A: None. Publish everything as I have said it. Thank you.

In Nigeria, same Sex Marriage Prohibition Act criminalizes same-sex affection, intercourse, homosexual clubs, associations and organizations, making it illegal for anyone to openly identify as gay or lesbian and also for same-sex oriented persons to hold a meeting or gathering of any sort; with penalties of up to 14 years in jail. To date, the act has drawn international reaction from countries such as the United States and Britain.

According to Amnesty International, Nigeria’s law reflects a highly religious and conservative society that considers homosexuality a deviation. Nigeria is one of 38 African countries – about 70 percent of the continent – that have laws persecuting gay people. In the words of Amnesty’s Shawn Gaylord, ‘’this law threatens the very livelihood of LGBT people and allies in Nigeria, and sets a dangerous precedent for persecution and violence against minorities throughout the country. In Nigeria generally, being gay can get a person lynched by a mob while no one will raise a finger to protect him or her; while in some parts where Shariah law is enforced, gays and lesbians can be legally stoned to death’’.