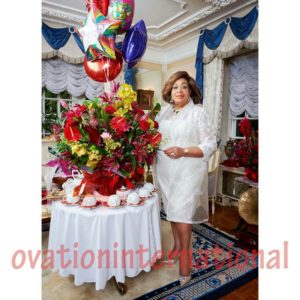 One thing billionaire business man, who is the Esama of Benin Kingdom, Sir Gabriel Igbinedion has over the year become synonymous with, aside his business acumen is the fact that he values and cherishes members of his family so jealously that he goes all out to attend to whatever that has to do with them.  As it relates with his Jamaican born wife of over thirty years, Lady Cherry, she could be simply said to be the apple of Esama’s eyes because the naked truth about them is that Lady Cherry is very close to the heart of her husband.

Based on this, fingers were crossed in anticipation of a grand bash when the woman recently was a year older to be 65 years, even as the Igbiniedions are known for elaborate parties. The usual Owanbe that was expected did not take place, but for whom Esama is, he would not let such special day of his dear wife go unnoticed. On this heel, the city of London was the destination for members of Igbinedion dynasty, privileged friends and associates, where the birthday girl was billed to have her day celebrated with a classy and lavish dinner. At a dinner that lasted for hours, birthday girl, Lady Cherry and her prince charming, Sir Gabriel had were cynosure of all eyes from the minute they arrived in Rolls –Royce. That guests were treated to a nice time must have been predicted and became reality as Igbinedions boast of a pedigree in dishing out kingly treatment to their guests whenever they have the opportunity of hosting people to a gathering of any kind.