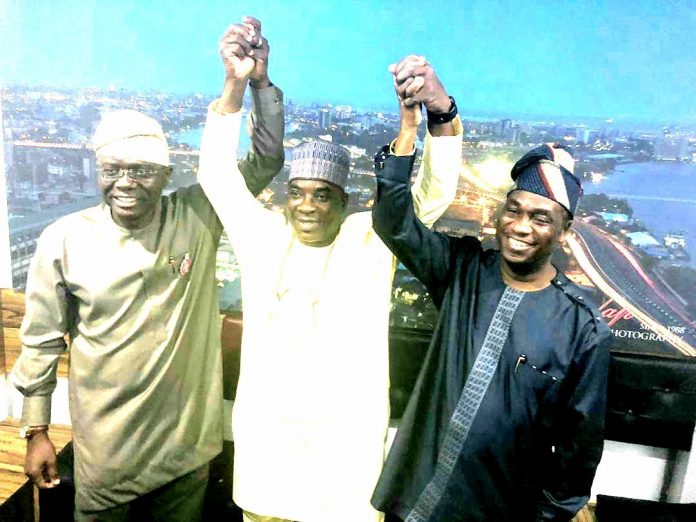 Fuji music king, Alhaji Wasiu Ayinde Marshal popularly called K1 De Ultimate officially met with Lagos APC governorship candidate, Babajide Sanwoolu and the deputy governorship candidate, Kadiri Obafemi Hamsat at their Awolowo Road koyi office this afternoon Tuesday the 4th of December 2018.
The meeting becomes the first to be done by the musician since the flag off of the campaign by the party.
K1 who is also a top party member used the opportunity to pledge his loyalty to the party  towards winning the election in the state next year.
The musician who came with his team promised to keep on supporting the party till victory is achieved at the next year general election.
interestingly, K1 made it known to the governorship candidate and his deputy that he’ll be supporting the campaign with 15 vehicles which he promised to take the campaign office in GRA Ikeja. He however brought 2 vehickes to the Ikoyi office that he presented to both Sanwoolu and Hamsat.
While speaking on the visit, K1 says  “the journey has started. we’ve mapped out plans to achieve this. We have  done this for the past three government and i am certain that what we started will turn out well. I have no doubt in my mind that victory is just by the corner.I am giving my words that my support will be total till we achieve the desired victory. I will only support with my music but every thing to make sure victory is ours”
Babajide Sanwoolu in his response said he is very delighted to receive K1 for his visit and he thank him for the vehicles. 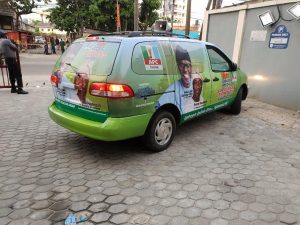