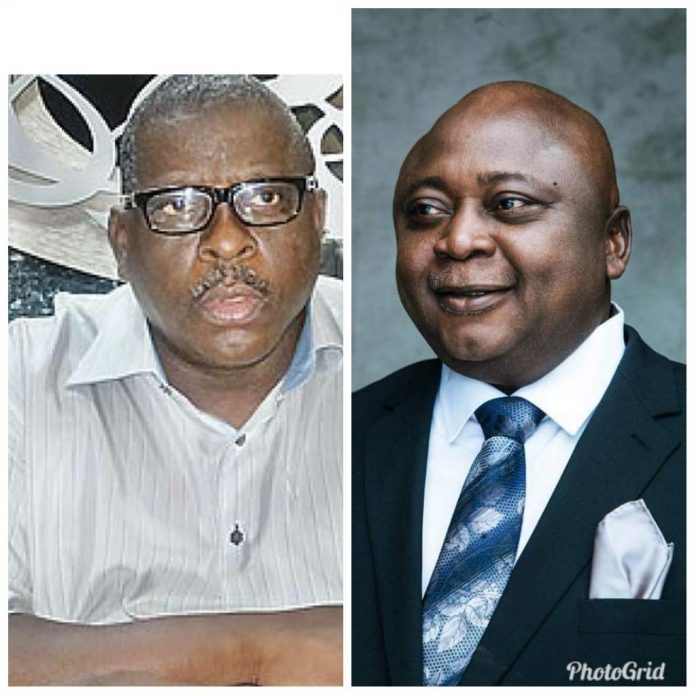 Crisis rocking Ogun state chapter of PDP over who becomes the authentic governorship candidate of the party ahead 2019 general election, is becoming more interesting as Senator Kashamu Buruji has called on the Inspector General of Police to hold the national chairman of PDP, Uche Secondus responsible if there is breach of peace, following the  symbolic handing over of the party’s flag to factional governorship candidate,  Honorable Ladi Adebutu despite court rulings he claimed were in his favor. 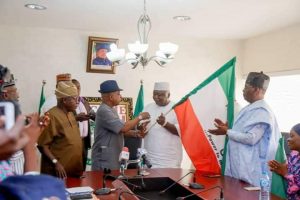 National leadership of Peoples Democratic Party led by Uche Secondus, had on Friday 6th December handed over party flag to Honorable Adebutu as a symbol of validating his candidacy as Ogun PDP standard bearer in next year governorship election.

Secondus, while presenting the flag to Ladi in Abuja, said Ladi was the authentic candidate of the party that he was elected at transparent primary and that his form was duly signed by him.

“Adebutu is the authentic governorship candidate of our party in Ogun state. He was elected at a transparent primary with his form duly signed by me as the National Chairman and National secretary respectively in accordance with our constitution and strict adherence to electoral laws.

Apparently referring to factional governorship candidate, Kashamu, he said he could not steal Adebutu’s mandate and that it is criminal to have printed party forms, screen and declared himself winner.

“You can’t just come from somewhere to steal the mandate. It is criminal to print party forms for yourself, screen yourself and also declare yourself as the winner.

“Once again, Hon Oladipupo Adebutu, I congratulate you sincerely and your Deputy.”

Kashamu who reacted through his aide, Austin Onyeokor, condemned action embarked upon by Secondus and declared such action is capable of breaching peace in Ogun state. It is in this vein he called on th Inspector General of Police, Ibrahim Idris, Minister of Justice, Abubarkar Malami and Director –General of the State Security Service, Magaji Bichi to take cognizance of Secondus actions that t is capable of causing tension and preach of peace.

Below is the statement released by Kashamu.

The governorship candidate of the Peoples Democratic Party (PDP) in Ogun State and Senator representing Ogun East Senatorial District, Senator Buruji Kashamu has said that the National Chairman of the PDP, Prince Uche Secondus should be held responsible “for breach of public peace and safety should there be a breakdown of law and order in Ogun State” in the build up to the 2019 general election.

He urged the Attorney-General and Minister of Justice, Mr. Abubakar Malami, the  Inspector-General of Police, Mr. Ibrahim Idris and the Director-General of the State Security Service (SSS), Mr. Yusuf Magaji Bichi, to take cognizance of Secondus’ conduct which, according to him, is capable of causing tension and a breach of public peace.

Kashamu spoke in a statement he issued at the weekend following the presentation of the Ogun State PDP governorship flag to a member of the House of Representatives, Hon. Oladipupo Adebutu, in Abuja, on Friday.

He said the AGF, IGP and DG, SSS should refuse the temptation to allow “some misguided politicians” to take the laws into their hands and continue to act contemptuously of valid and subsisting court orders and judgments while hiding under the cloak of politics and politicking. There is no gainsaying the fact that such illegal acts could cause unmitigated disorder and a breach of public peace.

The lawmaker noted that he would soon furnish the offices of the AGF, IGP and SSS with all the relevant documents, detailing the criminal and contemptuous acts of these retrogressive elements.

Kashamu said, “The desperation showed by Secondus is only typical of a mercenary who is hell-bent on delivering on the job he has been paid to do. His latest action was done in utter disregard to the Party’s Constitution and subsisting judgment of courts – from the High Court to the Supreme Court – which the Independent National Electoral Commission (INEC) has since complied with.

“It is a sad commentary on our democratic institutions that the National Chairman of our Party, Prince Uche Secondus, could preside over such a disgraceful exercise because he could not do it at the South-West zonal rally held on Thursday seeing the trouble such an illegal act could have caused. The shame is on Secondus and his co-travellers because they had to run to Abuja where they purportedly presented the Party’s flag to the impostor in an office whereas such an event is usually done openly and with fanfare.

“What is more, even if PDP presents 10,000 flags to Adebutu, it does not change the fact that the courts have pronounced the Engr. Adebayo Dayo-led Ogun State PDP Exco as the only party structure recognized by the law in Ogun State. It is merely ceremonial. It does not change the lists of candidates accepted, processed and published by INEC. It cannot change the verdicts of the High Court, the Court of Appeal and the Supreme Court.  It cannot also change the wide acceptance of our aspiration by the good people of Ogun State and beyond.”

Kashamu commended the notable leaders and elders of PDP who have always upheld the Rule of Law and democratic ethos even in the face of unjustified provocation.