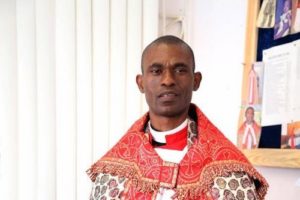 The end may not have been heard of the crisis involving Lagos state first family and sacked Chaplain of the Chapel of Christ the Light, Venerable Femi Taiwo, as there is a fresh revelation alleging the Venerable has a house he did not declare to the church authority. If the story is anything to go by, the Chaplain, Taiwo might have to face serious consequences from the church.

Information available at our disposal has it that Taiwo, an ex- Punch staff allegedly built a house while he worked in the advert department of the leading publication company and that he lied to have claimed he was stranded after he was by the Governing Council of the church. The said house, a four bedroom bungalow and a 2-bedroom boys quarter at the back is allegedly situated around Abule Egba.  The house, it was alleged is fetching the controversial pastor tidy sum yearly aside the tidy salary he earned as the chaplain of the government-owned church. It was gathered that the tall and lanky pastor built the house while he was a staff of Punch newspaper working in the advert department. But he hid the development from the Church management who would have queried the source of his ‘wealth.’

A source close to the ex- chaplain at Punch Nig Ltd said: “You know Pastor Taiwo was close to the powers that be in the management because he was their mole at the advert department, always leaking information on how the advert department was being run and how commissions were being approved or diverted. But little did the management know he was a beneficiary of the same racket he was giving information about. So he cleverly kept the news about his house from the management and most staff so that he could continue to enjoy the trust of his bosses. You know he was picked as the mole because he had started his biblical studies while in Punch and Management thought he could be trusted as a pastor in the making.” It was gathered that when the Chaplain ran into trouble waters with the church and was eventually sacked, it was to Punch, his old employers that he ran to but unfortunately fed them half-truth, which is why it is only Punch that has been publishing one-sided stories around his plight. It was learnt that one of such one-sided stories is the claim that Reverend Taiwo was ejected from his official house and that church members came to his rescue with a new apartment that is furnished. But a source disclosed that although the Pastor was relieved of his duty a government chaplain, he was never asked to leave his apartment within 24-hours. “It was a convenient lie sold to Punch and the public to curry public sentiment.  The source who said the pastor must seek forgiveness for the blackmail against the governor’s wife added that many church members knew Pastor Taiwo as an arrogant serial liar. “If he could lie to the church’s governing council about an unauthorized meeting he had with the First Lady and that his family would be stranded after willingly moving out of the official quarters when he owns a house, who knows what other lies he would have sold to his parent church and to the newspaper championing his cause.” It was however gathered having sensed that his fate hangs in the balance; Venerable Taiwo has been making moves to retrace his steps and tender a public apology to the church and to the first family.