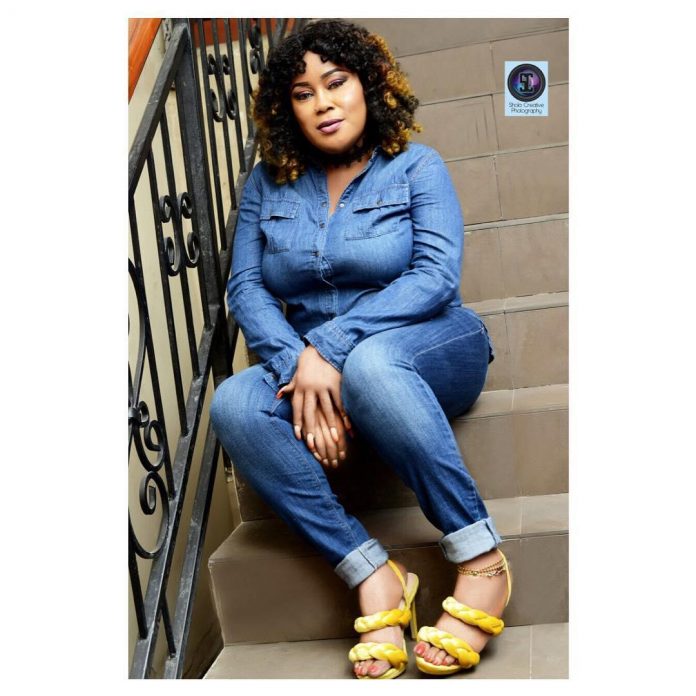 Mother of one Tayo Odueke, who is better known as Sikirat Sindodo became popular through her movie roles some years back but she has not been visible on the tube for a long time. However, she’s still fondly remembered for controversies she got involved in at different times. One of them was her romance with popular NURTW top shot, MC Oluomo, which ended on a sour note.

In this interview, the light skinned actress speaks about her relationship with Oluomo , why she’s not been visible in movie projects and more.

For my elementary education, I attended Mainland Preparatory Nursery and Primary School in Surulere, Lagos. I then proceeded to the Methodist Girls High School, Yaba, Lagos, for my post-elementary education. I did a two-year diploma course in Theatre Arts at the University of Ibadan. After that, I studied Creative Arts at the University of Lagos but I didn’t graduate.

My parents have always known that I have passion for acting but my dad didn’t like it. However, when I became famous, he became proud of me.

I cannot recall how many movies I have featured in but the first film I acted in was titled, Hired Assassin. It was an English movie directed by Charles Novia. As of that time, I didn’t even know that I was going to become an actress. A friend of mine had told me to folow her to an audition she had in Surulere and when we got there, I met people like Grace Ama, Ayo Adesanya, JT Tom-West, among others. I acted as a bodyguard to Segun Arinze’s character in the movie. While on that set, Segun Arinze directed me to a woman who was about shooting a Yoruba movie and that was how I really got into the movie industry.

I have produced about 18 movies including Were Alaso, Ikan, Efa, Itu, among others. While shooting the movies, I didn’t really face any challenges probably because I made them with my money; I didn’t have any issue with marketers. Everything went well.

The movie that led to my breakthrough is Sikirat Sindodo. The name, Sikirat Sindodo, has stuck with me ever since and it is always in the news for the bad reasons. People see me as a very wayward girl because of the role I played in the movie. Meanwhile, I am a very calm person. I don’t go out when it is not necessary and I mind my business. However, I don’t regret playing that particular movie because I was just doing my job.

People often think that Yoruba actors cannot speak English but that’s not true. Most of the people coming into the industry now are graduates. Even the ones that have been there before, who were not graduates, are going back to school. One problem that we have is that the pay in the industry is very poor and that is why I don’t appear in a lot of movies. The only way we make money is when we produce our movies.

Fame has opened a lot of doors for me. There are some places where some of my friends, who are not popular, cannot go but once I get there, they allow me in because they recognise my face. Some of the disadvantages are that when one goes to parties or run some chores, street urchins would often harass you.

I took a break sometime ago when I was sick. I had problems with my liver. However, That was a long time ago and I am okay now.

I have learnt to always be patient. It also pays to be careful and have a good manner of approach.

One of the biggest challenges we have in Nollywood is the issue of piracy. Nowadays, the Internet has taken over completely, compared to when I got into the industry. These days, people only watch cable TV, Youtube and other platforms. The number of people who watch terrestrial TV has greatly reduced. In a way, this has also killed the industry because people no longer buy DVDs and the marketers are complaining bitterly. We need government to support us so that we can do cinema movies. That way, filmmakers would make money and the audience would also enjoy.

My daughter recently turned 20. She is my best friend and I don’t like talking about her in interviews. She hasn’t shown any interest in acting.

I believe that’s an old story. He has dated plenty of actresses after me; I would rather not talk about him.

My career is still on; so, I don’t think I have gotten the highlight yet.

My man must be ready-made. I also like my man to be very prayerful, loving and caring. I am a very jealous person; I like my man to myself. I don’t like sharing. I can marry an entertainer because we are in the same industry. Right now, I’m ‘somehow’ in a relationship.

Whenever I want to unwind, I travel out of the country. Actually, I am a very boring person. I don’t go to clubs the way my friends do and I rarely hang out with people. Even when I travel, I usually stay in the hotel throughout except when I go out to shop. I have fun by shopping.

Back in the day, I always wanted to go all out; I usually went for very expensive items. I still do that though but now, I invest money in other things. I still go for expensive items but I’m moderate. My favourite fashion items are bags and wristwatches.

Additional report from The Punch