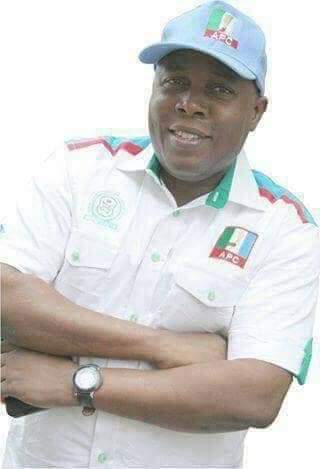 On Wednesday, 8 January, 2020, the Lagos State Chapter of the All Progressives Congress (APC) conducted a special congress to fill the vacant positions in the party’s Executive Council. Three members of the Executive Council of APC in Lagos State were appointed into the state cabinet by Governor Babajide Sanwo-Olu.
They are: Dr Wale Ahmed, Secretary; Joe Igbokwe, Publicity Secretary; and Toke Benson, Assistant Legal Officer.
In line with constitutional provisions, a special congress was thus held to fill the vacant positions.
Inaugurated as the new Secretary of the party in the state is two time member of the state House of Assembly, Honourable Micheal Olanrewaju Ogunyemi, simply known and called Lanre Ogunyemi or HLO.
A former classroom teacher,  Ogunyemi is a veteran politician despite being only in his 50s.
He started early and has always been a Progressive. He was a member of the defunct Social Democratic Party (SDP). He was also a member of the National Centre Party of Nigeria (NCPN), going on to become a foundling member of the Alliance for Democracy (AD).
From AD through Action Congress (AC) to Action Congress of Nigeria (ACN) and APC, he remained steadfast to the progressive ideals.
His political work experience started at Ojo Local Goverment where he served as Personal Assistant  (Administration) to the Late former Council Chairman, Dr. Solomon Akin-Aina.
From there, he became the state Secretary of the Alliance for Democracy (AD) Lagos, serving between 1999 and 2003.
He was then appointed the Special Adviser on Political Affairs to the former Deputy Governor of Lagos State, Otunba Olufemi Pedro from June 2003 till March 2007 when he was redeployed to the Governor’s office.
Ogunyemi, a vibrant and resourceful two-term member of the Lagos State House of Assembly  (June 2011-June 2019) was Chairman Committee on Energy, Mineral Resources and Waterfront Infrastructure  (in his first term ) and Chairman, Education Committee (in his second term).
He has impeccable record of good representation and his strides in community empowerment programmes to the aged, widowed, students, persons living with disabilities, market men and women,  the youth (vocational training), pilgrimages,  distribution of work tools to artesans, sinking of boreholes, facilitation of transformers, donation and erection of street light poles, construction of culvert, donation to other good causes, etc, are still in record.
A holder of a Bachelor of Arts Degree in Education (with English Language as specialisation ) and a Master’s Degree in International Relations and Strategic Studies both from Lagos State University, he has attended many conferences, seminars, workshops at home and overseas on diverse subjects.
Ogunyemi is an attendee of University of Cambridge Judge Business School Executive Education Programme on Transformational Leadership and Organisational Change ditto University of North America’s International Leadership, Government Economy, Negotiation, Communication and Fundraising Summit, amongst several other international studies.
A grassroots politician of good standing and pedigree, Ogunyemi is a reliable trustee to Leadership and has served as party officer at the ward and local government levels in times past. He is  unassuming, courageous and dependable and has handled so many committee, local and state assignments with utmost credibility and commitment.
Very recently,  Ogunyemi stood in for APC in Ojo Local Goverment as LGA results collation agent for the 2019 Presidential and Governorship elections. He was an aspirant for the APC House of Representatives ticket in Ojo Federal Constituency in 2015 and 2019.
He is a distinguished alumnus award holder of the Adeniran Ogunsanya College of Education, first ever to be so honoured, and a holder of a certificate in Public Relations from the  Nigerian Institute of Public Relations.
Lanre Ogunyemi’s re-emergence as State Party Secretary, the second time in nineteen years, speaks volume about the belief of the Leadership in him and a testimony to his unflagging loyalty and pedigree.
He is a recipient of numerous awards in Leadership, Politics, Administration, Education, Community Development,  Religious Tolerance and collaboration, Representation, Philanthropy, etc.

Ogunyemi is happily married to Oluwayemisi and they have children.