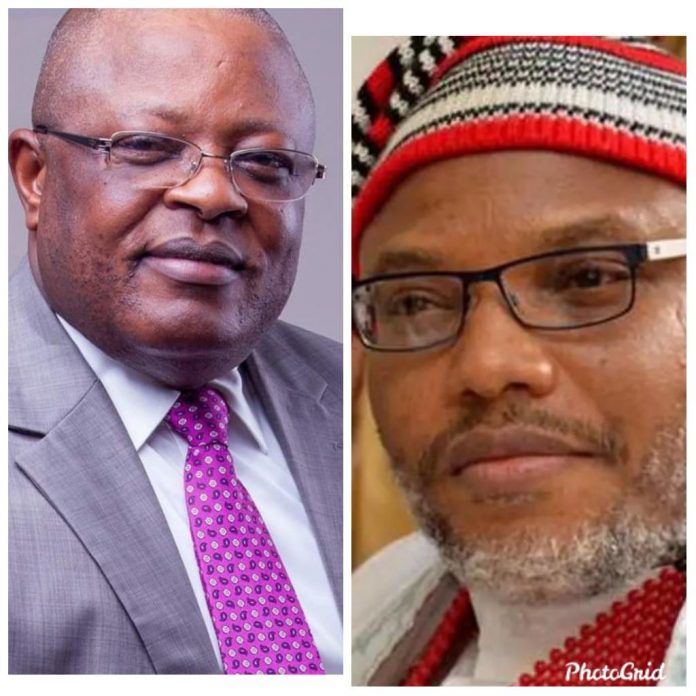 The Governor of Ebony State, David Umahi, has reportedly described the leader of the Indigenous People of Biafra, IPOB, Nnamdi Kanu as the greatest scammer in Igbo land.

The Governor noted that Nnamdi Kanu is using the message of Biafra to defraud gullible Igbo.

As contained in a video in circulation, Umahi was reported to have said Igbo people are being deceived to spend huge amount of money to finance what they know nothing about while Nnamdi Kanu spends it on his personal issues.

He also accused the IPOB leader of using cheap lies and blackmail against his government on social media to gain the empathy from some Igbos. He however asked to disregard Kanu and his pranks.

The Governor said in as much as he wouldn’t dignify the miscreants by joining issues with him, it had become pertinent to let the public know his new antics, so they can be wary of him.

Umahi described Kanu’s led group action as the last kick of a dying horse, having realized that their fraudulent activities in the name of IPOB have been exposed.

‘Nnamdi Kanu is being used to destabilize Ndigbo by deceiving people into believing that he can give them Biafra. Today, Kanu is using the same deceit to cause confusion in the Igbo land, not considering its adverse effects’.