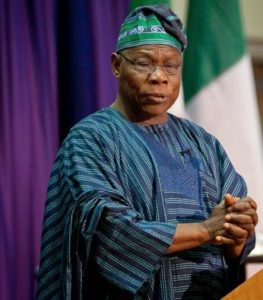 Among lot of wedding ceremonies that took place around the country in the last few days, arguably, that of the son of former President, Chief Olusegun Obasanjo, Olujonwon to Temitope Adebutu and that of daughter of former Military Head of State, General Ibrahim Babangida, Halimat to Auwa Lawal Abdulahi were most notable.

It will be recall that Chief Obasanjo’s wife, Taiwo had approached a court to stop the wedding between her son, Olujonwon and Temitope. However, since her prayer was not granted, in a grand style, Olujonwon and his lover, Temitope, daughter of billionaire lotto guru, Sir Kensington Adebutu, in a two legged event observed necessary marriage rites and they have since become man and wife. Immediate past governor of Ogun state and incumbent governor of the state, Otunba Gbenga Daniel and Senator Ibikunle Amosu were among guests who graced the occasion that held in Lagos.  Also in attendance were Oba Akiolu and well-loved and amiable respected, revered Ooni of Ile –Ife, His Imperial Majesty, Oba Enitan Adeyeye Ogunwusi, Ojaja II, among other dignitaries. Almost at the time this wedding ceremony was holding in Lagos, General Babangida also played host to guests who came from all over to felicitate with him, as his daughter, Halimat was given in marriage to a businessman, Sarkin Saudau of Gombe, Alhaji Auwa Lawal Abdulahi.  However, aside the societal effect generated by the two wedding ceremonies at the instances of these two prominent Nigerian leaders, Obasanjo and Babangida, the events may have unearth revelations that have

become subject of discussion in concerned quarters about the above mentioned powerful individuals.

As for Babangida, massive turn- out of dignitaries and powerful players in the political world at the carnival like of his daughter’s wedding signifies far much than a mere wedding ceremony but a revival and assertion of political relevance and authority. All for the event, it was an unusual day in Minna, Niger State.  Government and commercial activities were virtually brought to a halt. As early as 7.00am, the major roads leading to in and out of Minna metropolis, especially those leading to Hiltop mansion of the Babangidas, were taken over by heavily armed security personnel stationed at every strategic junction. Also, many shops and other business premises were shut, as most traders stayed at home due to the heavy traffic congestion and unusual security in town.  About twenty six individually owned jets and a few others owned by government landed in Minna aside lots of exotic automobiles that were seen around town for the same purpose.

Following his infamous shot at the presidency years back, many came to the conclusion that it may have been the end for the influence and grasp of Babangida on the political state of the nation, and more like buttressing the notion, the General withdrew into his shell even as he battled ill health. The notion however changed recently, when two other former Military Heads of state, Obasanjo and Abubakar visited Babangida in Minna for a meeting that was generally perceived to be at the instance of the ailing President, General Mohammadu Buahari. While some were still finding it hard to come in terms with the reality that Babangida is far from losing relevance, the wedding of her daughter brought about avenue to bury doubts of his authority and relevance, as the convergence of power brokers from all zones in the country on Minna is seen as confirmation of his weight as far as the entity, Nigeria, is concerned. Meanwhile, while politicians who hitherto condemned Babangida for various atrocities allegedly committed while in office were caught in the recent Minna web, pundits are of the opinion the Minna event only signifies Babangida is a factor in the making of serious political decisions and that ultimately, his inputs would count as regards where the pendulum of the power swings in 2019.

On the other hand, outcome of the comparison of the turn- outs between the Minna and Lagos events may have brought Obasanjo to his knees before Babangida, against whom he’s perceived to have been having unpronounced supremacy battle, as his ego is seen as been battered,  and his relevance and authority dented.  While Babangida recorded an impressive roll call, the same can’t be said of Baba Iyabo, as Obasanjo is called. Of course, the Obasanjo’s event was a well-attended one, even as guests must have also been present on the account of the bride’s father, who is a socialite and influential in his own right, but what was conspicuous was that heavy weights of Obasanjo’s constituency, political world were missing, as it is believed most of these politicians chose to honor Babangida over Obasanjo, since the events were holding almost at the same time.