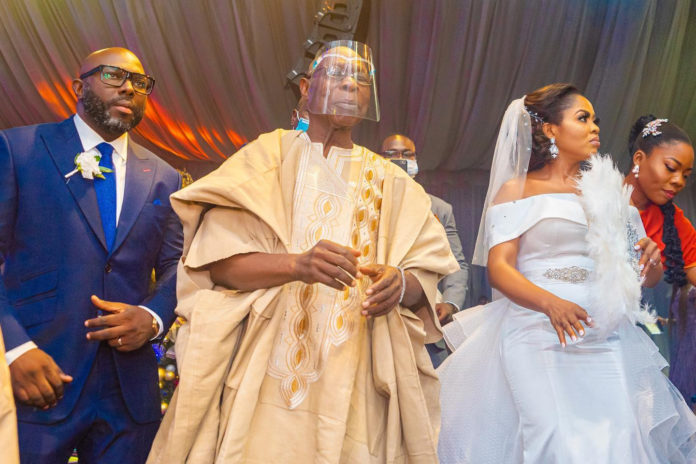 Family of the former President, Chief Olusegun Aremu Obasanjo will still be basking in the euphoria of a nice outing the family recently had, when they had the privilege to invite family, friends and associates to join them in celebration when one of their sons bid goodbye to singlehood and joined the married league.

After all preparation and anxiousness to see the wedding ceremony hold, the day eventually arrived December 12 and all roads led to Harvesters Christian Center in Lagos state where son of the former president, Olusegun Obasanjo, Seun and his hearthrob, Deola Shonubi were billed to become one, after observing all the necessary protocols, with consent of both families and in the presence of God and man as witnesses, Seun and Deola were pronounced man as wife.

The train of the event latter moved to the Federal Place Hotel, Victoria Island where reception of the wedding was held and guests were treated to a great time.

Chief Obasanjo was not left to savor the joy of the day alone, dignitaries who have great relationship with the former number one man of the country joined him to felicitate with him. Among important guests who added glamour to the wedding ceremony are, Ogun state Governor Dapo Abiodun, former EFCC boss Nuhu Ribadu, ex-NDDC Managing Director Timi Alaibe, and a host of others.

One of the highlights of the day however was when Deola received a Mercedes Benz SUV  Seun gifted her as a wedding present.