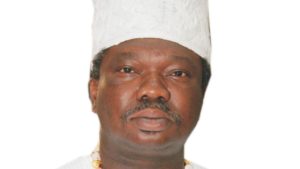 Dark skinned, stoutly built self-styled dude, Sir Olu Okeowo is one person who quietly goes about, running his businesses, even as he keeps breaking new grounds. But like a man’s talent announces him, Okeowo’s unusual and unrivaled wand in the construction and real estate industry where he’s a factor announced him like a gold fish without a hidden place. Okeowo is the founder of Gibraltar Construction, a successful business concern.

The grey hair spotting dude who is known for his penchant for Rolls-Royce, Sir Olu, recently added another year to be a year older, some who were privy to it had expected it was going to be another soiree like no other in Lagos metropolis, but perhaps, for his non loud nature, he opted for a low key celebration. The celebration was devoid of loudness, but certainly not without class and panache a man of Okeowo’s caliber radiates. A number of important dignitaries that attended include, Alhaji Razak Okoya and wife, Shade, former governor of Ogun state, immediate past President of Ghana, John Mahama, Mike Inegbese, Lanre Ogunlesi, Bashorun Dele Momodu were on hand to felicitate with their own in his new talk of the town home.

The wondrous gig he organized for his lovely, Adejoke, on her golden jubilee anniversary several months back, no doubt brought him to the consciousness of many who hitherto did not know him and it left them to believe Okeowo is really a man to beat. Recent tale that has made his name remained on the lips of many is the first of its kind edifice he recently built in Banana Island. The building, Palacio de Okeowo, is rated as one of the most beautiful houses in Lagos.