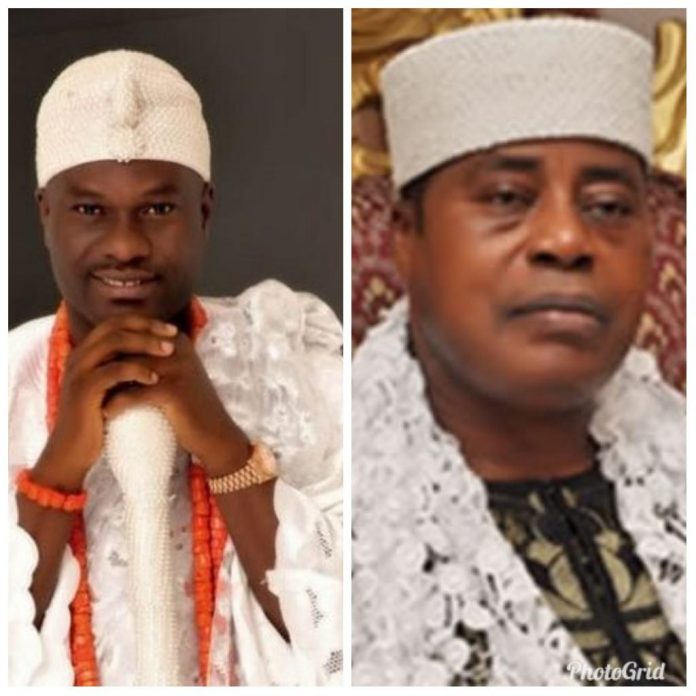 Going by events that have unfolded in recent times, there are indications that the high profile traditional ruler of ancient town of Ile- Ife in Osun State, His Imperial Majesty, Oba Adeyeye Ogunwusi, the Ooni and wealthy monarch of Ugbonla in Ondo state, Olugbo, Oba Fredrick Akinruntan have decided to take a break from peace that have hitherto reigned between them after their maiden battle of supremacy to return to resume the hostility.

Several days after the Ooni of Ife, Oba Adeyeye Ogunwusi, honoured Ogun State First Lady Olufunso Amosun, as Queen Moremi of our time, with the launch of a book, that extols the great virtues of historical Moremi Ajasoro,who is believed to be an heroine, by the medieval Ife people.
The Olugbo of Ugboland, Oba Fredrick Akinruntan and his people,recently in Ode Ugbo, countered history, by unveiling a statue of Moremi in a kneeling posture in Ilaje-Ugbo, in a bid to castigate her vices as a treacherous traitor,otherwise to what Ife believes.

It will be recall, Olugbo, Oba Akinruntan and Ooni of Ife, Oba Eniitan Ogunwusi, have been locked in a battle of supremacy and historical accuracy, as they both have given distinct versions of the exploits of Moremi in the era past. The divergence of accounts has pitched both traditional rulers against each other at different times.

To the Ooni and the Ife people, Moremi was a heroine whose feats were very pivotal to the freedom of Ife people at an age when external forces of the Ugbo extraction would invade their territory at will, cart away their possessions and enslave them. From the perspective of Ooni, Moremi Ajasoro became a goddess of liberty that liberated her people from captivity. But Olugbo would have none of the Ooni’s account, which he called historical distortion. According to Olugbo, Moremi, contrary to widespread belief, was a villain who betrayed the trust of the Ugbo people and sold them out to the Ifes. Olugbo explained that Moremi was the wife of Osangangan Obamakin, the first paramount ruler of Ile-Ife and the first Olugbo of Ugbo Kingdom, whose secrets and powers she later divulged to the Ifes.