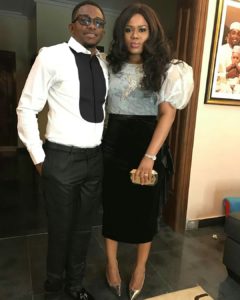 The name Peter Cole Chiori might not ring a bell across the society, but one fact that can’t be denied of the bearer of the name is that he’s highly influential and connected so much that he commands respect in the circle of well-to do individuals where he belong. Youthful and handsome Peter is the president of Ocean Glory Commodities and a factor in popular entertainment outfit, Achievas.

Anyone who is close to this dynamic and upwardly mobile dude would attest to how much value he places on family life, caring about his wife and kids. It was on the heel of how dearlhis wife, Lara is to him that he pampered the beautiful mother of two with a great bash when she turned 30th recently. The modest but classy birthday bash will linger in the mind of those who were privileged to be in attendance as the  host, Peter did everything within his means to make sure his lovely wife was happy and given a befitting birthday party. His influence on the entertainment scene came to the fore with influx of entertainers at the event. While Tiwa Savage led array of music stars who performed at the events, several other entertainment personalities that include comedian AY, Ubi Franklin, Teeblizz, Annie Idibia, Ruggedman to mention a few were present to felicitate with the birthday girl.