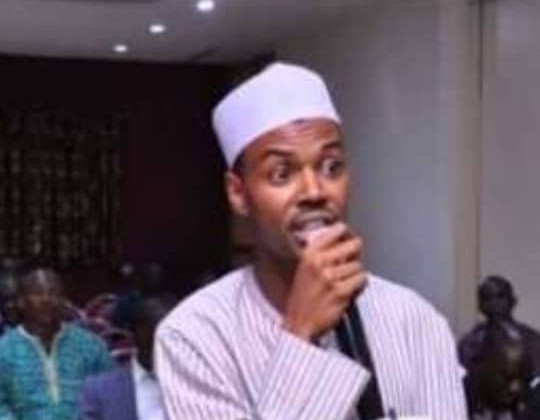 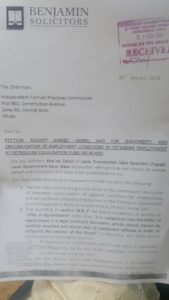 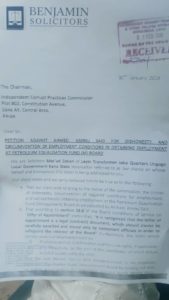 Aminu Said Ahmed received and signed the Acceptance letter addressed to his residence at 54 Ahmadu Bello Way, P. O. Box 4848, Yola, Adamawa state on the 26th of July 2004, agreeing to resume work on the 27th of July 2004. Meanwhile, he finished his Youth Service in September 2004. What is yet to be determined is how someone that should be in active service was able to receive a letter in far away Yola.He did not only benefit from this illegal recruitment but was also granted overseas study leave to study a Masters in Computer and Network Engineering in Sheffield Hallam University UK, with full study leave allowance paid for by the management of PEF before the confirmation of his appointment as required by the extent laws in the Civil Service Rules. The system was always skewed to favour him to the detriment of civil service cohesion and discipline. Public service rules and all extant laws which required him to have completed his two years probation and be confirmed before enjoying such benefit were disregarded. PEF staff have vowed not to let this matter be swept under the carpet as more facts of its operations will be sent to the public domain.Presidency blows whistle on illegal recruitments in ministries, parastatalsJuly 17, 2017 0The Presidency has exposed illegal, large scale and indiscriminate clandestine recruitments in federal ministries, department and agencies (MDAs).A circular by the former acting Secretary to the Government of the Federation (SGF), Dr. Habiba Lawal to the Chief of staff to the President, National Assembly, service chiefs, heads of ministries and agencies amongst others, said many MDAs have been carrying out recruitments in the guise of replacement of existing staff without following due process.The memo is titled “Streamlining procedures for recruitment into federal agencies.”While condemning the scam, which has led to Federal Government’s payroll ballooning, the circular warned MDAs to follow due process in their operations.It stated that if the practices continued unabated without reference to budgetary provisions and due process, government was at risk of owing workers salaries, budget shortfalls and the threat of increasing the cost of payroll, which was already over 40 per cent of total government expenditure.It said government has seen the need to take drastic action to arrest the situation in view of the current economic situation facing the country.The former acting SGF who frowned at the recruitments, which she said, were in flagrant disregard of rules and established procedures for recruitment in the public service, noted that the recruitments had affected the ongoing reform of the payroll and personnel cost management, as it had created ghost workers in the payroll who receive fraudulent and erroneous salaries and also perpetuated nepotism and regional imbalances in the public service.“The attention of the President has been drawn to reports of massive and indiscriminate clandestine recruitments in federal ministries, department and agencies (MDAs) in flagrant disregard of rules and established procedures for recruitment in the public service.“Many MDAs have been carrying out recruitments in the guise of replacement of existing staff without following due process,” she claimed.Lawal also argued that the current ongoing reforms aimed at providing a high level assurance on the integrity of the payroll and personnel cost would be jeopardised.The fromer acting SGF explained that government has decided to streamline the process and procedures for recruitment and appointment into the public service in conformity with the certain guidelines.She listed the guidelines to include: adherence to manpower budget for proposed recruitment, which must be approved by the supervising agency or ministry; obtaining of waiver to recruit from the office of the Head of Service of the Federation; appropriate budgetary provisions to accommodate the proposed recruitment and letter of clearance from the director general of the budget office of the federation to confirm budgetary provision for the proposed recruitment.Other guidelines include approval of Federal Character Commission for the distribution of vacancies for the proposed recruitment to ensure equitable distribution of vacancies among the states; obtaining certificate of clearance for the Federal Character Commission for the recruitment; representation of the Federal Civil Service Commission as observers in the recruitment process in the ministries, representatives of the office of the head of service of the federation in other to ensure compliance with extant rules and provision of recruitment.“In case of agencies/parasatals appropriate representation of supervising ministries and agencies to provide necessary guidance and give credibility to the exercise. Permanent secretaries and heads of extra- ministerial departments would be held personally responsible for ensuring strict compliance with this circular.“The implementation of the provisions of the circular takes immediate effect. Please bring the contents of this circular to the attention of all staff and ensure strict compliance,” she stated.This revelation no doubt will further cast aspersions on the anti-corruption crusade of President Mohammadu Buhari-led administration which many public affairs analysts and social critics believe is way too lopsided.Also, according to our impeccable sources in the parastatal, the interesting thing about the whole saga is that the indicted gentleman is about to be promoted whilst other sources say he’s actually being lined up for a juicy appointment in a matter of weeks.