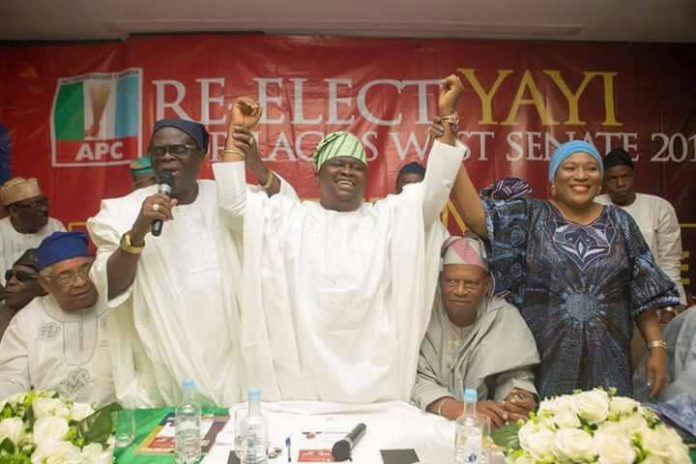 Member of the upper chamber of the national assembly, senate, representing Lagos West senatorial district, Senator Olamilekan Adeola Solomon, popularly known as Yayi, no doubt ranks among politicians in South West whose influence cannot be undermined. This will be recall played out in the keenly contested election that led him to the senate back in 2015. He contested against an equally formidable opposition in the person of Segun Adewale, popularly known as Aeroland, who was on the platform of PDP.

To those who religiously follow Yayi’s activities, it will certainly not be a hidden thing that the senator has unrepentantly fixed his gaze on the governorship position of his home state, Ogun even though he’s aware of obstacles in his way. Not minding all barriers,  the former member of the Lagos state House of Assembly , Olamilekan had in earnest started  to do his homework with the hope of succeeding Governor Ibikunle Amosun when his tenure eventually  elapses in about ten months’ time. In the same vein, Yayi is believed to have counted largely on Asiwaju Tinubu to make it possible for him to pick the APC governorship ticket ahead the next general election in 2019.  However, despite his effort the coast is believed never to have been cleared for him to nurse the ambition beyond a mere dream.

Adeola’s ambition is alleged to have repeatedly been rebuffed by Senator Ibikunle Amosun who is believed not to be favorably disposed to the idea of Yayi taking over from him. While some quarters are of the belief that Amosun is against Yayi based on the fact that he has his own preferred candidate, others are of the belief Amosun does just not fancy his personality and that he feels Yayi is just unnecessarily being ambitious.  It is on this premise Amosun is believed to have convinced Asiwaju of dropping his support for Yayi. The whole process, sources revealed started working again Olamilekan since Asiwaju Tinubu dropped his support for him.

Being a dodged one, Yayi it was learnt did not give up but continued to keep hope alive. It was on this heel, he was said to have started courting Governor Akinwunmi Ambode, with the hope of the latter sticking his neck out for him before deciders who will provide direction as regards where the party goes. Provision of financial back is also said to be another reason why he decided to court Akinwunmi Ambode.  Sources further revealed it was only a matter of time that Ambode began to avoid him when he discovered how difficult it will be for the former’s aspiration to fly. Not done yet, Yayi, it was alleged toyed with the idea of flying his ambition on the platform of another political platform but ditched the idea upon discovery such move could be suicidal as far as his political career is concerned.

Meanwhile, going by the senator’s recent action, it could be conveniently said he has eventually come in terms with the reality that there is no way he could actually contest for Ogun state governorship position , at least not  on the ticket of All Peoples Congress, thereby resolving to seek a re-election to the senate in 2019. Olamilekan was on Sunday, 22nd of July formally endorsed for a re-election by hierarchy of Lagos West senatorial district.

Senator Olamilekan who took over the Lagos West senatorial district seat from Senator Ganiyu Olanrewaju Solomon, it will be recall in the process of seeing how his dream could become reality attracted condemnation from different quarters, accusing him of not living up to expectation in representing Lagos West on the altar of his governorship ambition alleged to be consuming his time and usefulness.