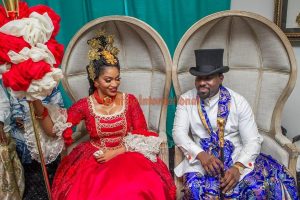 The date set eventually came days ago when all roads led to Calabar, Cross Rivers State, where handsome former governor of the state, Duke and his beautiful wife, Onari, played host to members of the High Society who were in attendance to identify and share in the joy of day as Xerona Duke, daughter of Cross River’s former first family in a traditional ceremony got married to Derin, son of former Lagos Commissioner, Chief Teju Philips. The ceremony which was held at the private residence of the Dukes in the ancient city of Calabar was spiced with a lot of cultural flavours as both families that are of Efik and Yoruba tribes proudly represented their origin.

The final leg of the marriage rites was later held in Lagos, days after the traditional ceremony held in Calabar. The final part, which was the white wedding, saw the couple exchange marital vows at Olive Tree Paros of The Redeemed Christian Church of God, Lagos. The church event and others were held with dignitaries from all walks of life in attendance.