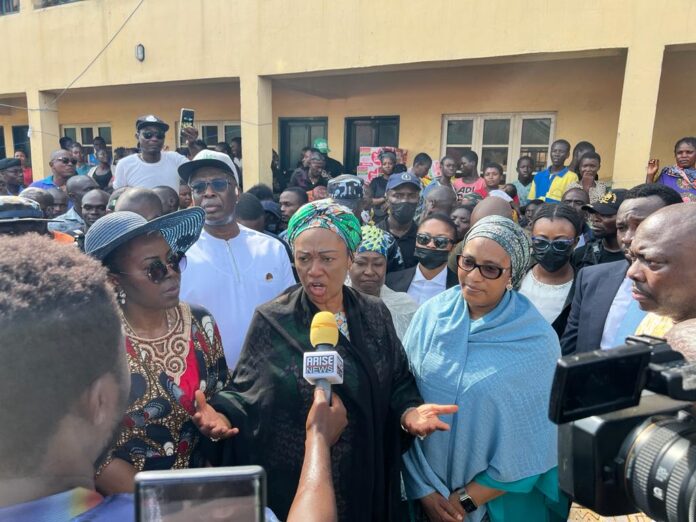 Tinubu who visited with Hajiya Fatima Shettima, wife of the Vice Presidential candidate of the APC, Kashim Shettima, was welcomed by Minister of State for Petroleum Resources, Chief Timipre Sylva, and his wife, Mrs Alanyingi Sylva, to Yenagoa, the state capital.

Joined by Sylva and others, Tinubu sympathised with the affected persons with relief materials including food and medicals.

Before her arrival to the state, an advance team of medical professionals were already providing medical services at the displaced persons camp in Igbogene.

Tinubu was welcomed with cheers by thousands of IDPs at the Oxbow Lake pavilion, the biggest displaced persons camp in the State.

Speaking at Oxbow Lake camp, Senator Tinubu emphasised that her visit was strictly on humanitarian grounds to personally empathise with Bayelsans over the devastation brought by the floods and to extend a helping hand.

Apart from drugs and medical equipment, food, wrappers and other relief items, she also donated N50m to the State.

Tinubu explained that the money was for 1,000 affected individuals receiving N50,000 each as a post-flood intervention, saying that the process would be managed by the Minister of State for Petroleum Resources, Timipre Sylva.

he stated: “We have come here to empathize with you. We thank the Honourable Minister and his wife, whom we call ‘Mama Petroleum’.

“We thank them sincerely for what they have been doing and we greet the people of Bayelsa State. We know what has come upon this land and we come with glad tidings.”
Speaking to reporters, Alanyingi Sylva described the situation as delicate and a time for the best of humanity to be exhibited.
She hailed Bayelsans for holding fort and stated that there is some solace in the fact that help is arriving and that the worst phase is behind.
Speaking at the Igbogene IDP camp, Chief Timipre Sylva commended the resilience of Bayelsans, the thoroughness of the camp coordinators and the orderliness of the people which had kept complete anarchy at bay.
Sylva thanked Senator Oluremi Tinubu and Hajiya Fatima Kashim Shettima for the visit and assured them that it was a moment Bayelsans would always affectionately remember.
In a brief visit by Senator Tinubu and others to the Obenibe of Epie Kingdom, His Royal Majesty King Malla Sasime, the monarch expressed gratitude to them for the humanitarian gesture.

Sasime said: “These acts of humanity are what it takes a society to actually grow. We appreciate you and the Honourable Minister so much for remembering our people at this critical time. Thank you and may God bless you.”