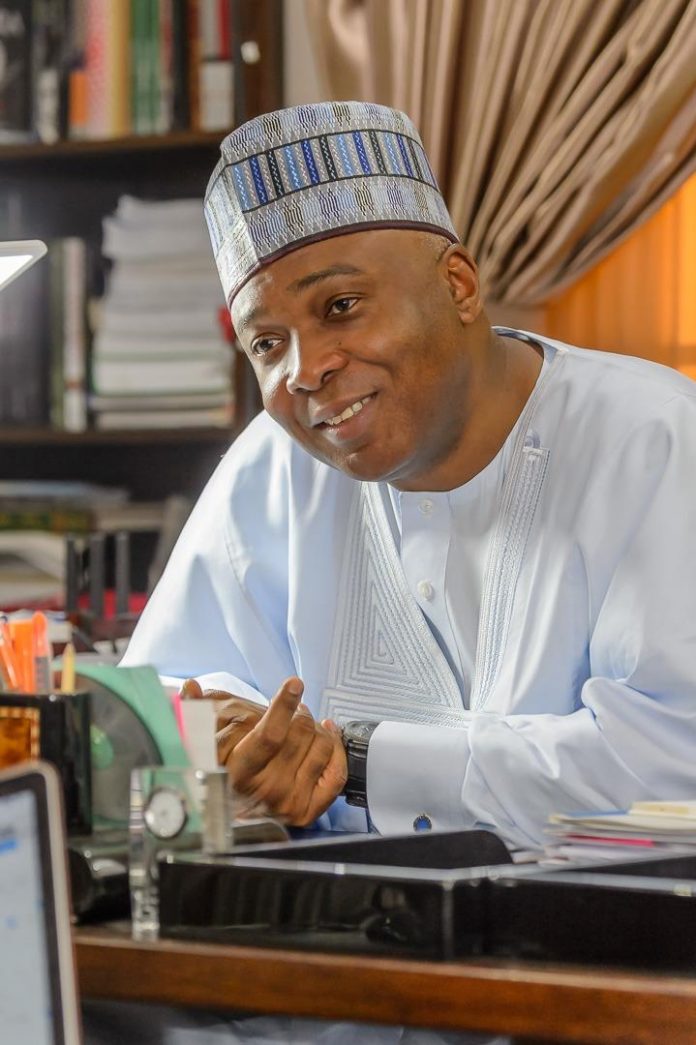 WITH his emergence as the President of the Senate in June 2018, Senator Bukola Saraki stirred up a hornets’ nest among the political cabal, who saw his emergence as an affront and a challenge to their political dominance and supremacy.  Observers had said his emergence betrayed all political logic and permutations of the political cabal, it was an unforseen masterstroke that caught them in the web. They saw his emergence as a threat and a few steps away from his longtime dream of becoming Nigeria’s President in 2019. He had barely settled down to begin work as the President of the eighth Senate when fury and fire were unleashed against him.  They dug up accusations and charges upon charges, from fake assets declaration, to the very recent alleged involvement in Offa robbery case. Many of Saraki’s associates and close allies were not spared while the war raged, his wife, Toyin Saraki, was invited by the EFCC to answer questions in relation to several contracts executed by companies said to be linked to her while her husband was the governor of Kwara State. EFCC declared wanted, another ally of the Senate President, Kennedy Izuagbe, a former Director of Societe Generale Bank Nigeria Plc and Managing Director of Carlisle Properties and Investment Limited, companies said to be associated with Saraki. Izuagbe was declared wanted over a case of conspiracy and money laundering to the tune of over N3.6 billion.

Then came the big one, the Code of Conduct Tribunal, CCT, invited the Saraki for trial on 13-counts charge of false assets declaration- a breach of Section 15 of the Code of Conduct Bureau and Tribunal Act, Cap C15, LFN 2004 and punishable under Section 23 (2) as incorporated under paragraph 18 of Part 1, Fifth Schedule of the 1999 Constitution. And it went on for over two years. Two years of fierce and what seems like an unending battle. Meanwhile, the CCT had in 2017 quashed the 18 counts of false asset declaration and money laundering against Saraki by the government for lacking in merit. Not satisfied with the CCT acquittal of Saraki, the Federal Government filed for an appeal.  In its ruling in January 2018, the Court of Appeal agreed in part with the decision of the CCT, but held that Saraki had a case to answer in counts 4, 5, and 6, which had to do with his purchase of properties in the Ikoyi area of Lagos State.

After the Appeal Court judgement, Saraki headed for the Apex Court, when the matter came up at the Supreme Court on Friday 6th July, the court held that there was no basis for the Appeal Court to have asked the Senate President to defend himself on the remaining three charges, having found the entire evidence of the prosecution as a product of hearsay.

The Supreme Court, therefore, dismissed the entire 18 charges against Saraki and consequently discharged and acquitted him accordingly. Saraki himself seems not to be oblivious of what led to his ordeal, he believes “the case was trumped up in the first instance because of my emergence as the President of the Senate against the wishes of certain forces,” he added. “As I said in my first appearance at the CCT, this is a politically motivated case. Ordinarily, I doubt anyone would be interested in the asset declaration form I filled over 15 years ago.”  The Senate President also said “at the end of a tortuous journey of 1018 days counting from September 22, 2015 when the case began at the Tribunal, I am happy that I have been vindicated. Through it all, I refused to be shaken, knowing, as Dr. Martin Luther King Jr. said, that the arch of the moral universe may be long, but it bends towards justice. I knew the day would come when justice would prevail and I would be exonerated.”

Just as skillful pilots gain their reputation from storms and tempests, the tempests that rose against Saraki has only made the Senate President stronger, broke some in the past and sent them into political oblivion. Now that the Federal Government’s storm assigned against Saraki has finally ran out of rain, after 1018 days. Political commentators have begun to make case for the need for the man who has been the main issue in Nigerian politics in the last three years to seek a safer haven. A political commentator, Segun Arobiodu said “those times of Saraki trial were dangerous times for Nigeria’s democracy, that some aggrieved people outside the Senate could highly influence government institutions against a sitting Senate President because they felt their interest is not properly represented in the composition of the leadership of the Senate questions our democracy. It was also more worrisome that all the travails were inflicted on Saraki by the political party he largely contributed to its formation and played a major role in its coming to power by leading the N-PDP bloc out of PDP which sent the PDP out of power in 2015. I think the best decision for the Senate President, after all these, is to dust his shoes and move forward to a better place where he would be better respected and appreciated.”

A public affairs analyst, John Nwosu in his reaction to the ruling of the Supreme Court also said “the whole war against Saraki was a big embarrasment to the image of the nation and the government in power, the APC. When the party is supposed to be working together to rebuild the nation and fulfil its campaign promises, its leaders were decipating energy on a needless fight against the Senate President, like market women.  Now the result of the fight is evident with the economy crumbling daily, security situation getting worse, and Nigeria sitting in shame as a nation with extreme poverty. If Saraki, who dared all odds, left certainty in the PDP for uncertainty in the APC, toiled, campaigned, planned, and was a major contributor and vociferous advocate for the coming to power of the APC, could be treated like a street urchin by the APC, and he decides to remain in the APC, he needs no prophet to tell him he has gotten a very sure recipe for his political funeral, the magnitude of which will leave him and his followers in an irrecoverable shock,” Modinat Aroyeun, a politician from the Southwest said.

Abdullahi Yahaya, coordinator of a pro-democracy group, Youth Arise for Good Governance (YAGG), also opined that “the first precautionary step for anyone who just survived a storm of such magnitude is to seek a fair haven, not staying in a house that has been severely damaged by storm. If such house collapses, he dies and would be regarded as a fool who survives a storm but got killed by an avoidable disaster. The APC’s house is already shattered by a self-inflicted storm; the house is falling like a house of cards, now is the best time for Saraki and his allies to move forward to seek a fair haven.”

Salako is a public affairs analyst