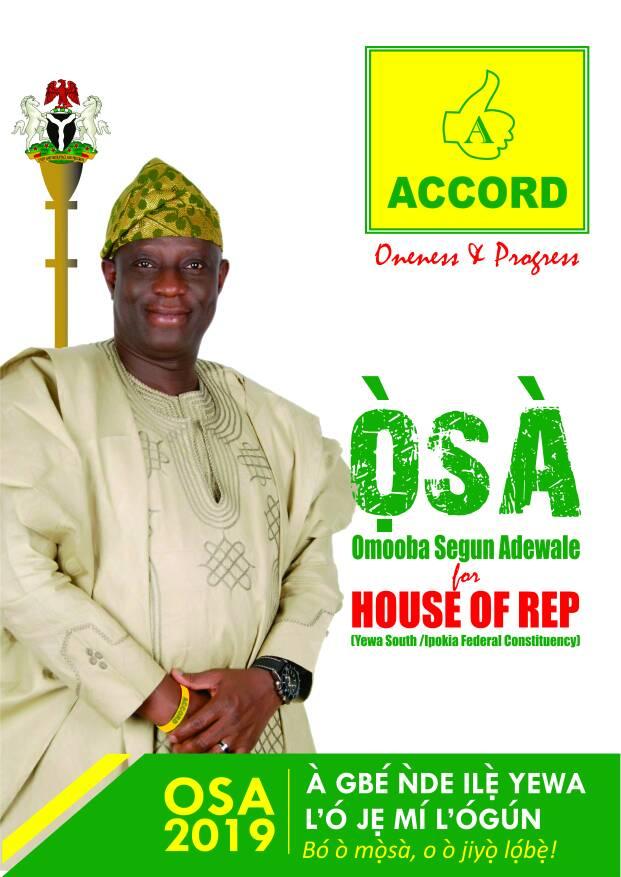 Expectedly, as 2019 draws nearer, there is usually influx of individuals who signify interest in gunning for one elective office or the other. Meanwhile, not all these declarations are considered honorable and genuine by the people as the antecedents of each person dictates how their ambition is regarded. It is as a result of this measure that the ambition of Omooba Segun Adewale, who is also known as OSA, is exciting the people even as it is gathering momentum on a daily basis.

OSA’s ambition to represent Yewal South/Ipokia Federal Constituency at the House of Representatives is believed to be getting the favourable responses among his people based on the sacrifice and helping hand he had been giving them. Through his private scheme, OSA Foundation, Adewale has in the last ten years been committed to giving a better living condition to the people of Yewa through different means. Part of it is providing free medical assistance to various communities, giving financial aid to the needy, paying school fees for indigent students among many others. Now, the people feel it is time to pay him back. Aside his laudable gesture, Adewale’s wealth of experience, achievements at home and away, are fact-finding evidence that comfortably positions him as a humble, resourceful, and successful manager of men and resources they can trust with their representation. Today, he’s a member of Accord Party.

Adewale, a former governorship aspirant, advertising and marketing guru was born into the family of late Alfred Oladipo Adewale of fragrant memories who hails from a royal family in Itoro,Yewa South Local Government and Iyalode Susannah Adewale, from Koko, in Ipokia Local government of Ogun State. He obtained his advanced level and first higher national diploma certificates respectively from the prestigious Ogun State Polytechnic, Abeokuta (now Moshoodabiola Polytechnic). He later followed up with a post-graduate diploma in management and master of business administration, both obtained from the Lagos State University. He’s also an outstanding earner of community development certificate from the United States of America.