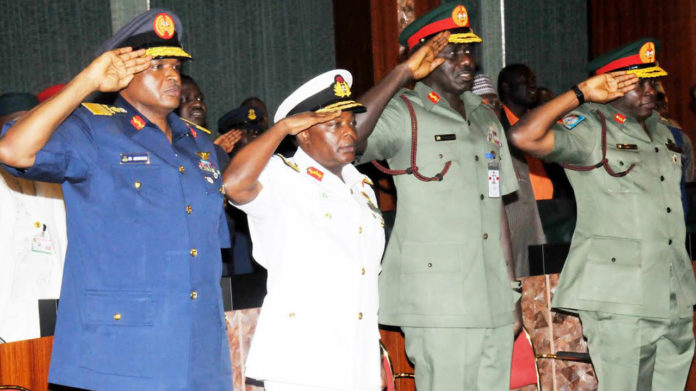 The Nigerian Senate has asked President Muhammadu Buhari to sack the Service Chiefs and replace them with people with fresh ideas and solutions.

In addition, they asked Buhari to investigate allegations of widespread corruption and leakages within the security architecture.

The senators passed the resolutions at Tuesday’s plenary during a debate on security, in the wake of the killing of 43 rice farmers by Boko Haram in Borno.

Former governor of Borno, Kashim Shettima brought the issue to the floor, giving a new information that 67 farmers were killed.

Shettima, who was in Maiduguri on Monday, as part of a Federal Government delegation, said any government that cannot protect its citizens loses any iota of legitimacy.

He urged Buhari to remove the security chiefs and replace them with new ones with ideas to address the alarming insecurity in the country.

According to the resolution adopted by the Senate, the senators also urged Buhari to explore a multilateral partnership with Niger, Chad, and Cameroon.

The National Assembly had made similar suggestions in the past.

But Buhari has always snubbed them, saying they have no right to dictate to him.