Ilesa, Osun State-born Princess, Toyin Kolade, needs little or no introduction. Her achievements and successes as a business woman speak volume of how hardworking she is that makes her a factor to be reckoned with in the business world.

On the other hand, her involvement and influence on the social scene is second to none.

One other good thing about this boss of Fisolak Investment is that she values her home, which makes her to honour and adore her husband, who in return showers her with love and affection.

As a wife that cherishes her man and his contributions, Princess decided to give her hubby a surprise party to make his golden jubilee birthday anniversary a memorable one.

It was however not an elaborate affair but a modest party where immediate family members, friends and a couple of well-wishers were invited to their home to felicitate with the birthday boy. 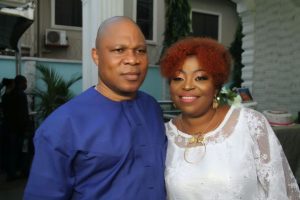