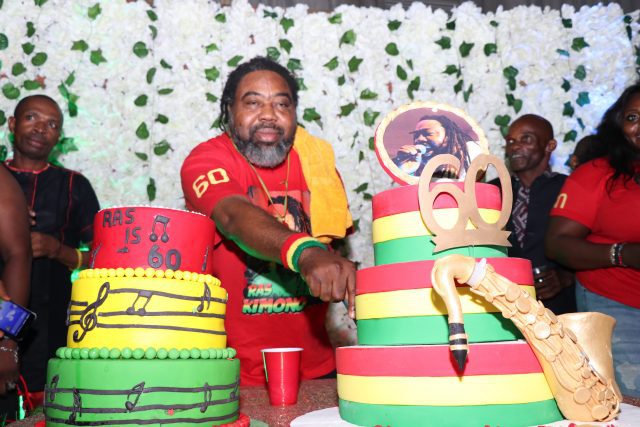 One of the most patronized event centers in the heart of Ikeja, Lagos, Times Square, may have been used to seeing crowd but the facility days ago recorded what can be described as unprecedented crowd, drawing  largely from Nigeria’s entertainment industry. 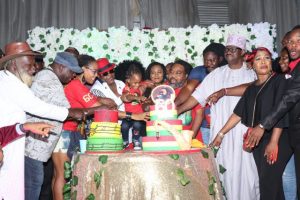 This was not totally surprising given that the event was in honour of one of the greats that the industry has produced.

It was the 6oth birthday celebration of renowned reggae artiste, Ras Kimono who turned 60, drawing friends and associates from far and near.

It was a like a roll call of who is who in the industry, and the encomiums, backslaps and kudos lasted till about 11pm

The celebrant’s daughter, Oge Kimono was also on hand for the celebration.

Though several turned up for the event, the number was pruned down by the tight frisking at the gates, as only those with due invitation cards were allowed entry.

By the time gathering was called to order, it was about 4pm, with light music drifting from vantage positions.

Ace broadcaster, Bisi Olatilo mounted the podium, for the preliminaries, pouring encomiums on the celebrant.

He described him as, not just a talented artiste, but one with a human heart, who felt what his anyone around him felt.

Olatilo went down memory lane, recalling the highlights of warm relationship that began when both didn’t seem to have any comeliness and had stood the test of time.

According to him, he was used to dancing reggae without even knowing the classification, a situation that helped his bonding with the celebrant.

By the time, Ras mounted the podium, he underscored every point Olatilo had made, describing him as a supportive friend.

He said Olatilo truly got to work early, promoting his music even when it was not known.

Agata Amata equally recalled how she came in contact with the artiste, singling out his Ayaga yagayo, as her favourite amongst the lot that the artist had produced.

Kenny St. Best also went down memory lane, recalling particularly, how Under Pressure rocked the nation at its release. According to her, that number happened to be one of her best, even as she prayed for long life for the celebrant.

A highlight of the day’s honour was the cutting of the birthday cake equally adorned the dominant colours of red, green and yellow, and the cutting took place right on the stage.

In the dance segment, DJ Humility treated the audience with intriguing reggae numbers.