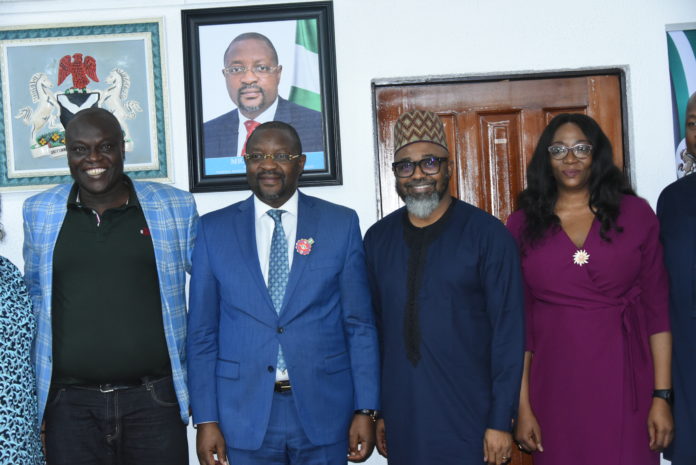 Minister of Youth and Sports Development, Mr. Sunday Dare, has declared his ministry’s readiness to partner with MultiChoice Nigeria in its bid to revamp the country’s sports sector. The minister made the declaration in Abuja on Thursday when Mr. John Ugbe, Chief Executive Officer, MultiChoice Nigeria paid him a courtesy visit in his office.

Dare stated that the ministry has, as its major agenda, a reset of the sports sector to ensure a vibrancy, a goal he believes MultiChoice is well positioned to help bring to fruition. Components of the envisaged reset, the minister said, include a revamp of infrastructure, deliberate talent development initiatives and drive for corporate sector involvement to accelerate financial growth of the sector.

Responding, Ugbe thanked the minister for seeing MultiChoice as a partner in the bid to develop sports in the country. Ugbe noted that MultiChoice’s commitment to sports development, which began decades ago, will remain unwavering. He noted that the company is the biggest investor in Nigerian sports as well as preeminent supporter of Nigerian boxing through GOtv Boxing Night, GOtv Boxing Night NextGen Search and the recently introduced GOtv Boxing Night Mini, each of which has rescued the sport from the wretched state into which it fell for over two decades. The MultiChoice boss also used the opportunity to invite the minister to grace GOtv Boxing Night 20, which holds on 28 December at the Tafawa Balewa Square, Lagos, and will feature a World Boxing Federation Intercontinental heavyweight title bout among others. Ugbe listed the company’s other footprints in sports as including the company sponsored the Nigerian Basketball League for years, during which the Nigerian team qualified for the Olympic Games; years of officially broadcasting the Nigerian Professional Football League (NPFL) and continuous live-broadcast matches of the Super Eagles, Flying Eagles and Golden Eaglets in addition to matches of the prestigious European football leagues as well as other major global sporting events. To build the capacity of the country’s sports administrators, Ugbe added, the company funded a training programme in conjunction with the University of Nigeria Nsukka and South Africa’s Wits University to raise sports administration standards.

Responding, the minister expressed hope that the desired partnership has the potential to bring about the much-needed renaissance in the sector. He mandated staff of the ministry, led by Mrs. Maria Wophill, a Deputy Director, to work with MultiChoice to bring the partnership to life.