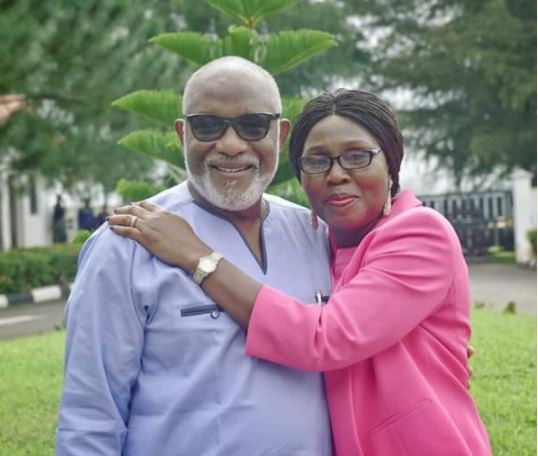 By virtue of their status as the number one couple of the Sunshine State, Ondo, Governor Rotimi Odunayo Akeredolu and his wife, Betty, are respectable couple whose positions are very much enviable. However, the journey to their present status was not a roller coaster but one that is characterised with a lot of perseverance, sacrifice, dedication, commitment and above all, true love that defiled ethnic barrier. Also the fact that Betty is even older would have stopped them from becoming husband and wife.

Love at first sight aptly describes the coming together of Rotimi and Betty according to the narration of the First Lady in one of her interviews. Betty revealed she fell in love with her husband upon sighting his broad shoulders. In her word, ‘I fell for his broad shoulders’. She said. Young and beautiful Igbo lady, Betty, a fresh graduate of University of Nigeria, Nsukka, was working in the Federal Department of Fisheries when her path crossed with that of Rotimi, who was at that time a corps member serving in Enugu State.

What was thought to have been mere attraction or infatuation between them grew to become real that it eventually snowballed into marriage despite all odds. On April, 18, 1981, Rotimi and Betty signed the dotted lines to become husband and wife. With three children to show for the union and grandchildren, it has been 37 years of undying love and togetherness between the first couple of Ondo State.

Governor Akeredolu has unapologetically and unrepentantly displayed his love for the wife; the wife too has ceaselessly stood by her husband even in his struggle for power that eventually yielded desired result after initial unsuccessful attempt. As the First Lady of the state, Betty has also played a very appreciable role complimenting the efforts of the governor. In the same vein, her campaign against breast cancer is being celebrated far and wide. Even her husband’s giant strides in Ondo State are also getting accolades.