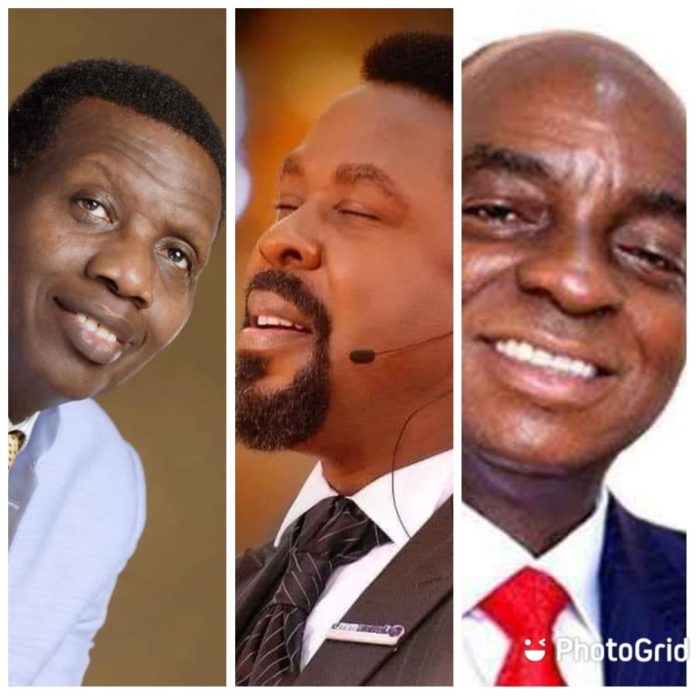 That the remains of the founder of Synagogue Church of All Nations, Temitope Balogun Joshua, aka TB Joshua, has been laid to rest is no more news, as the Arigidi Akoko born man of God was laid to rest yesterday, Friday.

What is likely to be of interest however, is how the absence of some notable Nigerian pastors at the funeral has become a controversial issue in the society.

Some of the top pastors that were thought to ought  have been there are, General Overseer of Redeemed Christian Church of God, Pastor Adeboye, Founder of Winners Chapel, Bishop David Oyedepo, W.F Kumuyi of Deeper Life Church; Paul Enenche of Dunamis Church; Lazarus Mouka of the Lord’s Chosen Charismatic Church.

Although, there has not been any form of reactions from the family of the departed man of God or his church, over absence of these front line pastors, but on the other hand, some members of the society have taken it upon themselves to condemn absence of the said pastors.

The internet had since been awashed with the incident as some are of the view the men of God in question, most of whom never associated with the deceased while he lived, took their alleged animosity with the deceased too far by not turning up at his funeral to pay their last respect to the departed soul.

Radio personality who is also internet enthusiast, Daddy Freeze went out of his way to make a video where condemned action of the pastors.

Some others however stood in defense of the pastors. “Nobody hated him, it was an issue of doctrine on salvation, apparently the deceased had his own philosophy which many thought to be contrary to bible.
If you notice, I included, I haven’t seen the deceased make an altar call for repentant souls,” a tweep, @black_ash422, said.

Defending the pastors, Emmanuel Adeloye wrote on facebook “I don’t know why we just like to spring up unnecessary trouble. I don’t know if Joshua refused to go into the ground because Adeboye and Oyedepo were not present. Pastors have died and buried, you guys didn’t notice Oyedepo and Adeboye were not present”.

Late Prophet TB Joshua, it will be recall acted almost like a lone ranger while he lived as many other top pastors never associated with him. It was perceived some of these top pastors kept him at arm’s length based on his doctrine that was believed not to be in sync with bible principle.

Pastor Kris Okotie of Household of God was known for his criticism of TB Joshua.

Adeboye reportedly sells off helicopter over high cost of maintenance