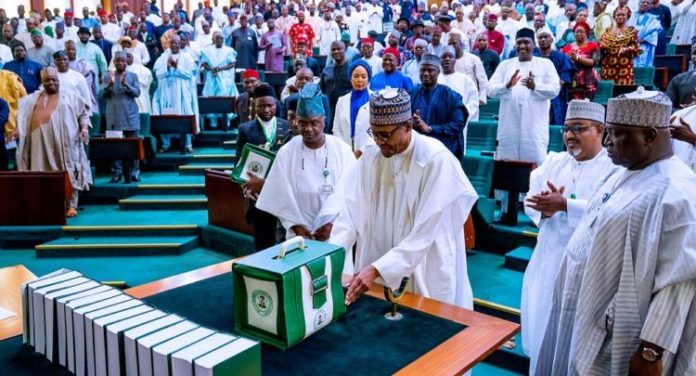 We bring you key other highlights of the budget below:

The ministry of works and housing got the highest allocation among the ministries with N262 billion, followed by ministry of power which has N127 billion, and transportation with N123 billion.

The social investment programmes including the N-Power scheme and the school-feeding initiative among others got N30 billion while the ministry of Niger Delta affairs got least allocation with N24 billion (this is, however, aside the N62 billion budgeted for the amnesty programme). You can check out other MDAs allocations here

Buhari said the federal government hopes to spend a total of N2.46trn on capital projects during the 2020 fiscal year, inclusive of N318.06 billion in statutory transfers.

“Although the 2020 capital budget is N721.33 billion (or 23 percent) lower than the 2019 budget provision of N3.18 trillion, it is still higher than the actual and projected capital expenditure outturns for both the 2018 and 2019 fiscal years, respectively,” he said.

The president said the emphasis of the 2020 budget will be the completion of “as many ongoing projects as possible”, rather than commencing new ones.

“MDAs have not been allowed to admit new projects into their capital budget for 2020, unless adequate provision has been made for the completion of ALL ongoing projects,” he said.

“Accordingly, we have rolled over capital projects that are not likely to be fully funded by the end of 2019 into the 2020 Budget. We are aware that the National Assembly shares our view that these projects should be prioritised and given adequate funding in the 2020 Appropriation Act.”

ESTIMATES BASED ON VAT INCREASE, OVERHEAD COSTS AT N426.6BN

The 2020 appropriation bill is proposed based on the planned increase of the VAT rate from 5% to 7.5%, while the overhead costs are projected at N426.6 billion.

Buhari said the additional revenues will be used to fund health, education and infrastructure programmes, with 85 percent going to states and local governments.

“Additionally, our proposals also raise the threshold for VAT registration to N25 million in turnover per annum, such that the revenue authorities can focus their compliance efforts on larger businesses,” Buhari said, adding that this is to enable proper growth of MSMEs.”

FISH, YAM AND BREAD AMONG ITEMS EXEMPTED FROM VAT

Buhari said some of the items which will be exempted from the VAT, in addition to the pharmaceuticals, educational items, and basic commodities already excluded by the VAT act, include brown and white bread, cereals, fish of all kinds, flour and starch meals.

The appropriation bill further proposes a budget deficit of N2.18 trillion in 2020, including drawdowns on project-tied loans and the related capital expenditure.

“This represents 1.52 percent of estimated GDP, well below the 3 percent threshold set by the Fiscal Responsibility Act of 2007, and in line with the ERGP target of 1.96 percent,” the president said.

The president also said the federal government is setting aside N2.45 trillion for debt service during the 2020 fiscal year, out of which 71 percent is to service domestic debt which accounts for about 68 percent of the total debt.

He said there is an expected GDP growth of 2.93% in 2020, “driven largely by non-oil output, as economic diversification accelerates” with inflation expected to remain slightly above single digits in 2020.

Buhari said he has directed the stoppage of the salary of any federal government staff that is not captured on the Integrated Payroll and Personnel Information System (IPPIS) platform by the end of October 2019.

The current administration had introduced the platform to help manage personnel costs among other reasons.

He added that the proliferation of zonal, state and liaison offices by MDAs will no longer be tolerated as part of efforts to “sustain our efforts in managing personnel costs.”

“All agencies must obtain the necessary approvals before embarking on any fresh recruitment and any contraventions of these directives shall attract severe sanctions,” he added.