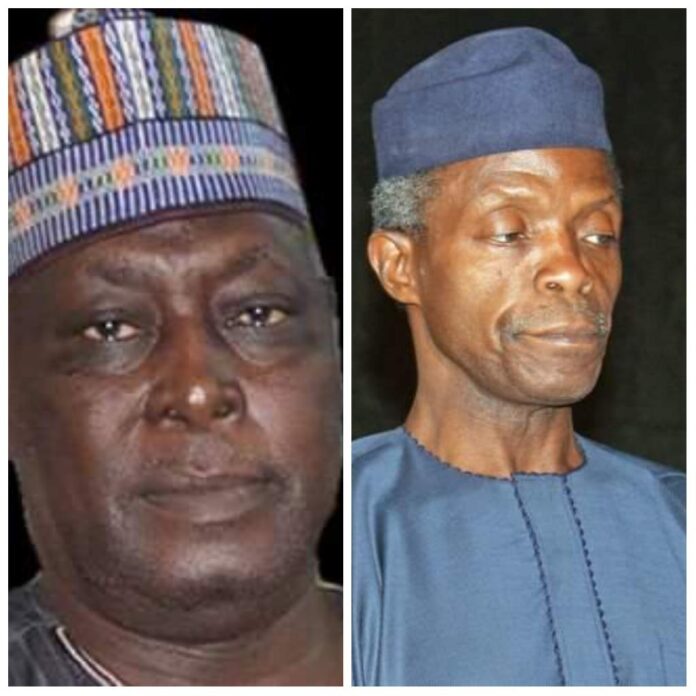 Former Secretary to the Government of the Federation, Babachir Lawal says Vice President Yemi Osinbajo is “a cunning pretender with ungodly ambitions”.

Lawal in a statement he personally signed said Osinbajo’s decision to contest the presidency against Tinubu was an act of betrayal.

Going down memory lane the former SGF said Tinubu not only nominated Osinbajo as VP in the 2015 elections, he also nominated him as President Muhammadu Buhari’s running mate in the 2011 elections before merger talks between the Congress for Progressive Change and the Action Congress of Nigeria failed.

“The truth is that the man is a cunning pretender with ungodly ambitions.

“But in deciding to challenge Tinubu in a presidential dwell, the devil has Osinbajo finally trapped. The devil has exposed him to failure, shame and ridicule. The devil is extracting his price. And it is going to be a very high price on him,” Lawal said.

“Let me tell a little-known story that dates back to as far as 2010. As the 2011 election season was approaching, the then CPC reached out to ACN with a view to working out a sort of merger or alliance for the pending 2011 election. After a series of meetings between the leadership of the parties, it became apparent that the chemistry was not right at that level because the desired results were not forthcoming. So one of my friends, also a Buhari loyalist and I sat down to review the situation in light of the fact that time was running out. That friend of mine is still alive and serving in the presidency.

“To our minds then, the main issue was the challenges of a moslem-moslem ticket especially as Buhari was at the time considered a ‘no-no’ in the Christian communities. In order to address this challenge, my friend and I approached Tinubu with a proposal that he should nominate a “loyal” Christian as running mate to Buhari. We emphasized the word ‘loyal’ because Buhari had earlier indicated that he will only seek for one term and no more. Therefore, the proposed VP too should be one that would agree to serve for only one term and then clear the way for Tinubu to run for the Presidency in 2015. Tinubu agreed to consider this proposal and gave us a date to return for his decision after consultations.

“On our return on the date promised, he gave us the name of Prof Osinbajo. I was aghast because I had prayed and hoped that he would nominate either his wife or my friend Kayode Fayemi both of whom we knew to be very young, brilliant, hardworking Christians from large church denominations. All through the night we tried to dissuade Tinubu from this choice but he stuck to his guns insisting that he can trust even his own life to this man, Osinbajo. Besides, he consistently argued that it will not be decent and proper to nominate his wife especially if he was to seek to be President immediately after her own tenure.

“In the end of course, another person was preferred by Buhari. CPC then went on to contest and lose the 2011 election. But when another opportunity came up in 2015, Tinubu had no hesitation in renominating Osinbajo to the post. Now this is the same Tinubu that Osinbajo’s hatchet men are denigrating with his ardent concurrence. ‘There is God who.’

“Surely it is the devil that has tricked Osinbajo into doing this most inglorious act of our time that will number him among the most ungrateful betrayers of all time. The consequence of this wicked exposure of his blind ambition will follow him and many generations of his children long after he must of have gone. Such a pity!”

According to Lawal, the president withdrew the social investment programme from the VP after his dismal performance.

“Mark my words, Nigerians are yet to know the reasons why the President took away all the Social Investment Programs from his office and handed them over to a little-known woman that had no prior working experience. And we are yet to know the reasons why he is no more assigned serious duties since the president’s recovery from illness. All these and more will begin to come out after 29th May, 2023 and they will not be savoury. Then the true understanding of who this man truly is will come. Then, he will be left standing; alone, a pariah as if naked in a market place (with no more trader moni),” he added.