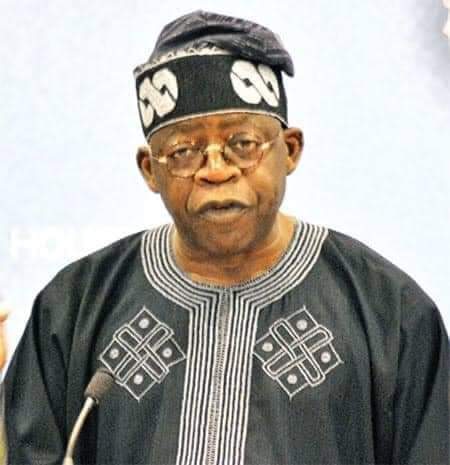 By Taofik Afolabi, Lagos based Journalist

First of all, let me aptly apprise you that the objective and content enshrined in this piece represent my personal opinion about the national leader of All Progressive Congress, Senator Bola Ahmed Tinubu aka Jagaban of Borgu and of course I owe no one any apology.

In recent time, the media both national and international have been awash by the news of Asiwaju Bola Ahmed Ahmed Tinubu after his declaration to contest the presidency of Nigeria in 2023 general elections.

While many saw his declaration as a good omen for the nation, other saw it as a mere dream and wish while some of his foes have been hitherto castigating him for making his Intention known to the world.

I’m one of the many who believed so much in the sagacity and economic prowess of Asiwaju to take Nigeria to the greater height.

However, I’m very bold to say that none of the candidates who had equally shown interest in contesting the coming election with him has what it takes to move the country forward like him. None of them has the vast political tactics to be compared with that of Asiwaju.

The indisputable experience garnered so-far by the former Lagos State Governor, Asiwaju, is bigger than that of prospective opponents jostling for the highest ranked seat in political terrain.

One thing that makes me dove my hat for Asiwaju Bola Ahmed Tinubu is how he managed his many establishments.

My investigation revealed that all his employees were enjoying good paycheck and never denied of their emoluments, this indeed is unprecedented considering phase of Nigerian economy.

I have eavesdropped some mongers wrongly accusing Tinubu of accumulate wealth via (yet not proved) corrupt means but I do ask, and challenge any of the critics to pinpoint a politician that has relied solemnly on his salaries and wages while on public office. Why should Tinubu be nailed and labelled as corrupt politician without any proof?

Another good thing that made the dossier of Asiwaju unabetable is his knowledge of how to manage crisis and human characters.

The Jagaban Borgu is highly strategic when appeasing his foes. No wonder that some Northern Elites described Asiwaju as a thief who had stolen their hearts.

The magnitude benevolence heart of Jagaban was revealed during the dark period of Endsars crisis, despite serious condemnation metted on him, he remain unperturbed and handled the trial with great cautious and diplomacy.

Another factor that rendered him to many and thus, made him the unbeatable Candidate is his ability to breed leaders, can anybody tell me the politicians at the current dispensations who have produced leaders on same volume at which Tinubu did. I challenge his unrepented critics to acknowledge the person.

For those who are given themselves unnecessary headaches about the declaration of Tinubu, should ask themselves why is he still very relevant after many years he has left political office. I want to ask them to tell me how many governors who governed their states same time with him are still relevant like him today?.

Asiwaju Bola Ahmed Tinubu’s agenda should be encouraged and we should allow him to turn around Nigeria as he did with Lagos State.

Kayode Ajulo: Osinbajo most experienced, duly primed for the job of Nigeria’s president