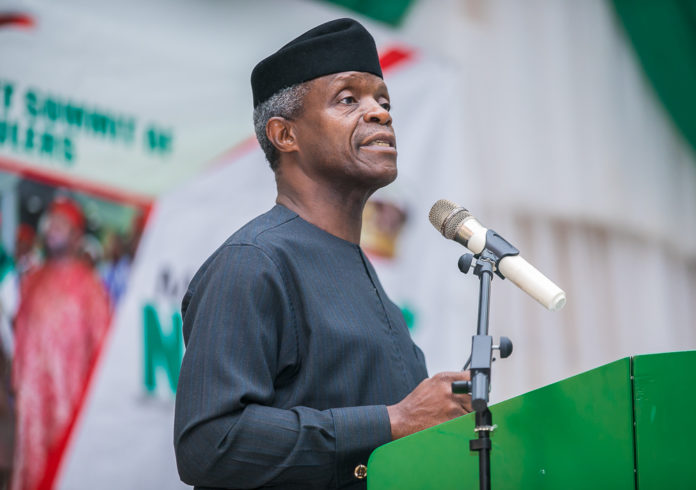 Some All Progressives Congress (APC) members in Ondo State, on Monday, organised a gathering to show solidarity for Vice President Yemi Osinbajo’s declaration to run for the presidency in the 2023 general elections.
The News Agency of Nigeria (NAN) reports that many of the supporters also trooped to the streets of Akure on Monday morning to celebrate the declaration.
Mr Ifeoluwa Fasoranti, Director General, Yemi Osinbajo Campaign Organisation, who addressed the crowd at Akure Town Hall, said the people are happy to hear that the vice president has finally declared interest in the presidency.
“We thank God the vice president has declared his intention to contest. He has all the qualities needed to be president. This is the first vice president who has had no face-off with the president.
“Southwest is ready for Osinbajo. Some people said he would not declare but now the eagle has landed.
“As a member of the cabinet, if you have one of 10 proposals approved, you’re lucky. So, we cannot say that he should take full responsibility of whatever happened in government.
Maito, who is the Ondo State House of Assemblymember representing Akoko North East, said with his experience as the number two citizen in the country, he would move the country forward.
Similarly, an APC stalwart in the state, Lady Agbayewa Oreoluwa, said they had been expecting Osinbajo to declare to run, and were happy he has done so.
“We have been expecting him for long to declare. Our children are suffering. The underprivileged, widows could not feed, so we need someone who can rescue us from this situation. We see Osinbajo doing this when he gets there,” she said.
A youth leader, Bamise Akintomide, also said that Osinbajo had the capability and energy to take the nation to the desired level, as a detribalised Nigerian”.
Also, Hon. Demola Ijabiyi, a chieftain of the APC, assured that the organisation would go back to the field and canvass delegates for the choice of Osinbajo.
“He has got the experience, having been involved in all policies and running of the government for eight years. He knows what area the nation needs intervention,” he said. (NAN)