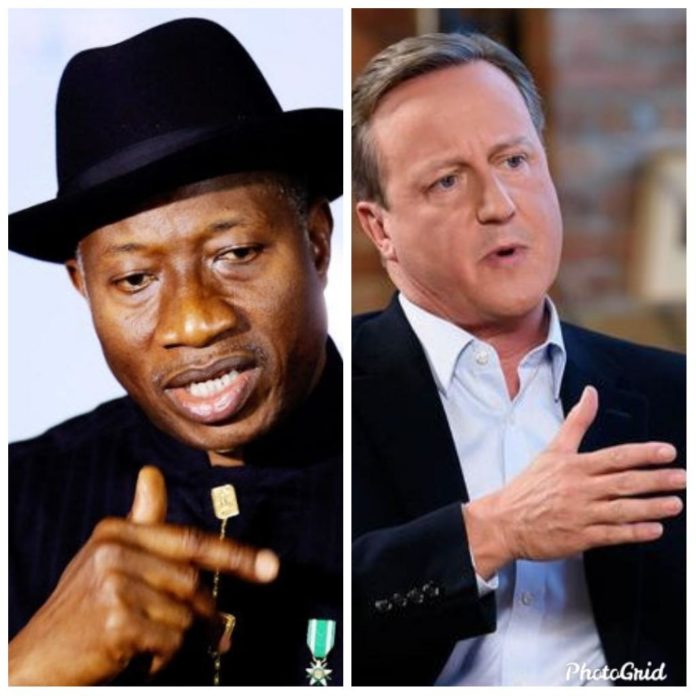 ….My Response to David Cameron’s Claims
I read the comments by former British Prime Minister, David Cameron, in his new book, For the Record, in which he accused me and the Nigerian Government, which I headed, of corruption and rejecting the help of the British Government in rescuing the Chibok Girls, who were kidnapped on April 14, 2014.
It is quite sad that Mr. Cameron would say this because nothing of such ever occurred. As President of Nigeria, I not only wrote letters to then Prime Minister David Cameron, I also wrote to the then US President, Barrack Obama, and the then French President, François Hollande, as well as the Israeli Prime Minister, Benjamin Netanyahu, appealing to them for help in rescuing the Chibok Girls.
How could I write to appeal for help and then reject the very thing I appealed for?
Also, history contradicts Mr. Cameron. On March 8, 2012, when the same Boko Haram linked terrorists abducted a British expatriate named Chris McManus, along with an Italian hostage Franco Lamolinara, in Sokoto, I, as Nigerian President, personally authorised a rescue effort by members of the British military Special Boat Service supported by officers and men of the Nigerian Army, to free the abducted men.
So, having set a precedent like that, why would I reject British help in rescuing the Chibok Girls, if it was offered?
I also authorised the secret deployment of troops from the United Kingdom, the United States and Israel as a result of the Chibok incident, so how Mr. Cameron could say this with a straight face beats me.
Moreover, on March 8, 2017, the British Government of former Prime Minister, Theresa May, in a widely circulated press statement, debunked this allegation and said there was no truth in it after Mr. Cameron had made similar statements to the Observer of the UK.
In his book, Mr. Cameron failed to mention that I wrote him requesting his help on Chibok. Why did he suppress that information? I remind him that copies of that letter exist at the State Houses in Nigeria and London. He never called me on the phone to offer any help. On the contrary, I am the one that reached out to him.
He accused me of appointing Generals based on political considerations. How could that be when I fired my service chiefs twice in five years, to show that I would not tolerate anything less than meaningful progress in the war on terror.
I was completely blind to ethnic or political considerations in my appointments. In civil and military matters, I appointed people that I had never even met prior to appointing them, based on their professional pedigree. Though I was from the South, most of my service chiefs came from the North.
I do, however, know that Mr. Cameron has long nursed deep grudges against me for reasons that have been published in various media.
On July 24, 2013, while celebrating the passage of the United Kingdom’s Marriage (Same Sex Couples) Act, 2013, Mr. Cameron said “I want to export gay marriage around the world”.
At that occasion, he boasted that he would send the team that successfully drafted and promoted the Bill, to nations, like Nigeria, saying inter alia:
“I’ve told the Bill team I’m now going to reassign them because, of course, all over the world people would have been watching this piece of legislation”.
As President of Nigeria at that time, I came under almost unbearable pressure from the Cameron administration to pass legislation supporting LGBTQ Same Sex marriage in Nigeria. My conscience could not stomach that, because as President of Nigeria, I swore on the Bible to advance Nigeria’s interests, and not the interest of the United Kingdom or any foreign power.
As such, on Monday, January 13, 2014, I signed the Same-Sex Marriage Prohibition Bill into law after the Bill had been passed by an overwhelming bipartisan majority of Nigeria’s parliament, in line with the wishes of the Nigerian people. This happened shortly after a study of 39 nations around the world by the U.S. Pew Research Center came up with a finding which indicated that 98 percent of Nigerians were opposed to the idea of Gay Marriage.
Immediately after I took this patriotic action, my government came under almost unbearable pressure from Mr. Cameron, who reached me through envoys, and made subtle and not so subtle threats against me and my government.
In fact, meetings were held at the Obama White House and at the Portcullis House in Parliament UK, with the then Nigerian opposition to disparage me, after I had signed the Same-Sex Marriage Prohibition Bill into law.
On the issue of corruption, it suffices to say that Mr. Cameron is not as competent as Transparency International, which is globally acknowledged as the adjudicator of who is corrupt and who is not.
During my administration, in 2014, Nigeria made her best ever improvement on the annual Transparency International Corruption Perception Index, moving from 144 the previous year, to 136, an 8 point improvement. As a nation, we have not made such improvements on the CPI before or after 2014.
In line with these facts, I would urge the public to take Mr. Cameron’s accusations with a grain of salt. I will not be the first person to accuse him of lying on account of this book, and with the reactions in the Uk so far, I definitely will not be the last.
Dr. Goodluck Jonathan, Chairman of the Goodluck Jonathan Foundation and President of Nigeria 2010-2015

David Cameron: We located Chibok girls but Jonathan didn’t allow us rescue them

David Cameron, former British prime minister, has alleged that ex-President Goodluck Jonathan did not give enough support to Britain during the abduction of 274 schoolgirls in Chibok, Borno state.

The abduction, which took place on April 14 2014, had sparked a global outrage following which the international community offered to assist Nigeria.

In For The Record, his memoir, Cameron, who was in office at the time of the incident, said British troops traced the location of some of the victims and offered to help but Jonathan refused.

“Iraq wasn’t the only place we would need our military to counter this extremist menace. Boko Haram in Nigeria was linked to al-Qaeda, and believed Western education and lifestyles were a sin (the meaning behind its name). It too wanted to institute a caliphate, and like ISIS it would use whatever barbaric means it thought necessary,” Cameron wrote in the book.

“In early 2014 a group of its fighters centered the government secondary school in the village of Chibok, seizing 276 teenage girls. They were taken to camps deep in the forest. The Christians among them were forced to convert to Islam. Many were sold as slaves, entering the same endless violent nightmare the Yazidi women suffered.

“As ‘Bring Back Our Girls’ campaign spread across the world, we embedded a team of military and intelligence experts in Nigeria, and sent spy planes and Tornadoes with thermal imaging to search for the missing girls. And, amazingly, from the skies above a forest three times the size of Wales, we managed to locate some of them.

‘But Nigeria’s president, Goodluck Jonathan, seemed to be asleep at the wheel. When he eventually made a statement, it was to accuse the campaigners of politicising the tragedy. And absolutely crucially, when we offered to help rescue the girls we had located, he refused.”

But in an interview with BBC last year, Jonathan had said Boko Haram should be blamed for the abduction of the girls because as a president he could not go to the battlefield to fight insurgents.

“I cannot take responsibility for the abduction, I don’t control Boko Haram. They are criminals. But as a President, of course you know it is not the President that goes to the field. You have security and intelligence officers that do the work,” he had said.

“Let me admit that yes, maybe they did their best but their best was not good enough for us to recover the girls. That I cannot say I am right or I am wrong. That does not mean I am trying to remove myself from any blame.

“I may not be blamed for the action but I could be blamed that my security intelligence system was not strong enough to rescue the girls. If I as a politician could tell the whole world that my political ambition for any office is not worth the blood of a single Nigerian, how would I be happy that girls have been kidnapped? I am not that kind of character.”

In his book, Cameron also said the Nigerian army was unable to participate in operations the US and UK forces organised for the rescue of Chibok schoolgirls because of “politically appointed generals”.

The ex-British prime minister wrote on how the Archbishop of Canterbury was contacted to assist during the intervention in Nigeria.

“We had to play the long game focusing on a much bigger training effort for the Nigerian military and intelligence forces and trying to promote more energetic leaders from the younger generation. The Archbishop of Canterbury, as an expert on Nigeria, could be particularly useful on this and I invited him to join our NSC discussion,” he wrote.

“Some of the girls have managed to escape over the following four years, and others have been released, but over a hundred are still missing. Once again. the combination of Islamist extremism and bad governance proved fatal.

“How did I feel about all this at the end of 2014? The answer is, depressed. ISIS now occupied an area larger than Britain. A similar brand of terrorism was being wrought by Boko Harem in west Africa), another ISIS affiliate in north Africa, and by al-Shabab (‘the youth) in east Africa, while related groups were springing up in the Philippines, Bangladesh, Afghanistan and the Caucasus. There seemed to be no stopping an evil ideology that seduced minds from the badlands of Syt’tato bedrooms in Birmingham. When I spoke about the challenge publicly I tried to remain measured and resolute. But privately did asked myself, would we ever be able to defeat this thing?”

A total of 112 Chibok schoolgirls have remained unaccounted for. The government of President Muhammadu Buhari secured the release of more than 100 while 57 managed to escape.