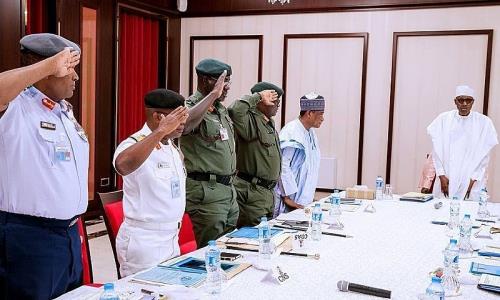 Special Adviser to the President on Media and Publicity, Femi Adesina, has again emphasized that only President Muhammadu Buhari has the prerogative to fire the service chiefs because he appointed them.

Adesina, who appeared on Hot Seat Special, a live programme on Ogun State Television, OGTV, today, made that statement against the backdrop of the recent clamour for the sack of the service chiefs due to rising insecurity in the country and their seeming incapacity to solve the intractable problem.

Adesina also accused those clamouring for the removal of service chiefs of expressing a malicious propensity and willful desire to see others fall.

“Some people like to see people dismissed, not just talking of service chiefs now. They just like to see people fall. They rejoice. ‘En Eh he is no longer there,’ as if they are the ones that would go there. Generally you see that in our society,” he said.

The President’s spokesman also said no matter what people say, the president would definitely have his way.

Adesina said it is the president that can assess the service chiefs and likened him to a teacher who assesses his students:

“The President has spoken many times about their performance, though he feels they can do better. But if he decides to keep them, it is his prerogative because he is the one that appointed them,” he said.